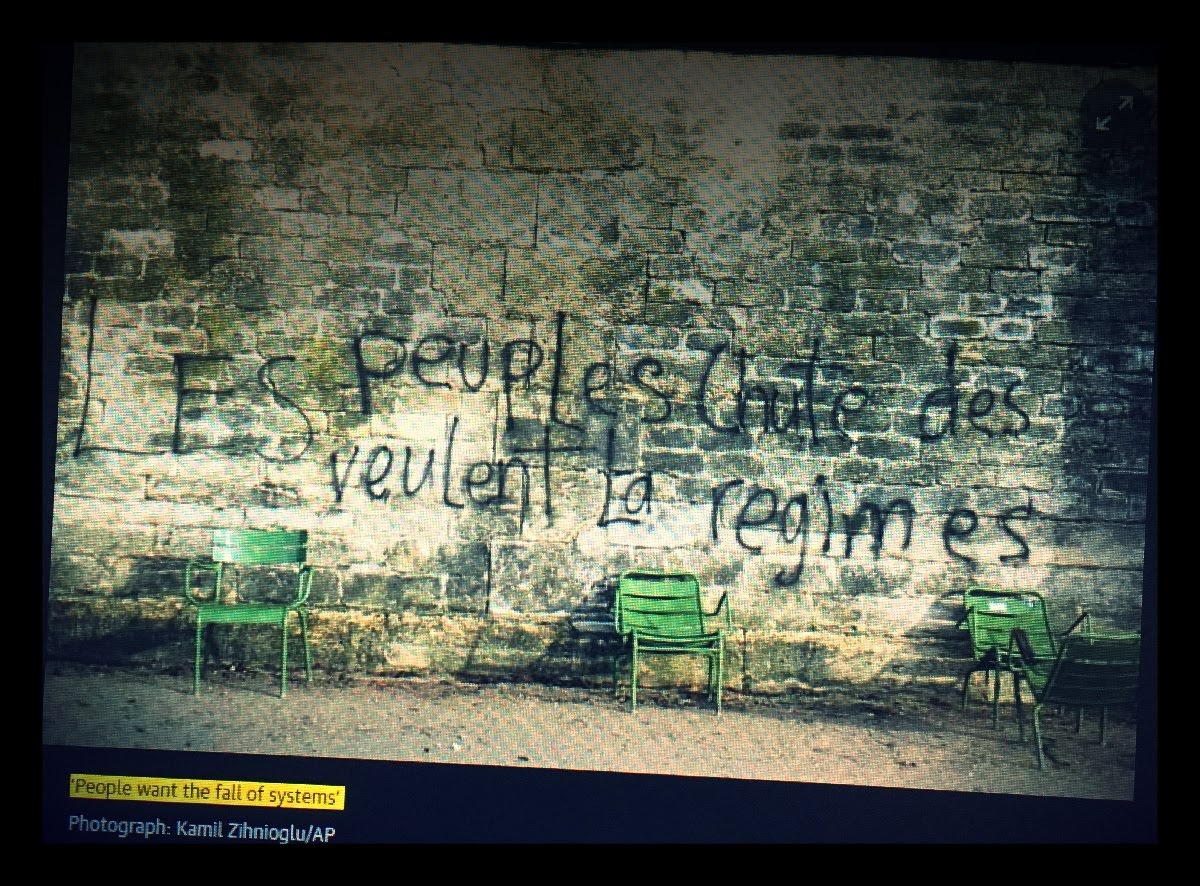 Whether or not we continue to trust in politicians, journalists or officials, we have grown increasingly used to this pattern in which a curtain is dramatically pulled back, to reveal those who have been lying to or defrauding the public. Another pattern also begins to emerge. It’s not just that isolated individuals are unmasked as corrupt or self-interested but that the establishment itself starts to appear deceitful and dubious.
in "Why we stopped trusting elites" 29 nov 2018

consider some of the reasons why trust has been withdrawn: a combination of technology and market forces

Elites have largely failed to understand that this crisis is about trust rather than facts (...) and unless those institutions can rediscover aspects of the original liberal impulse – to keep different domains of power separate, and put the disinterested pursuit of knowledge before the pursuit of profit then the present trends will only intensify.

When trust sinks beneath a certain point, many people may come to view the entire spectacle of politics and public life as a sham. This happens because key public figures – notably politicians and journalists – are perceived as untrustworthy. It is those figures specifically tasked with representing society, either as elected representatives or as professional reporters, who have lost credibility.
in "Why we stopped trusting elites" 29 nov 2018

For hundreds of years, modern societies have depended on something that is so ubiquitous, so ordinary, that we scarcely ever stop to notice it: trust. The fact that millions of people are able to believe the same things about reality is a remarkable achievement, but one that is more fragile than is often recognized. At the heart of successful liberal democracies lies a remarkable collective leap of faith: that when public officials, reporters, experts and politicians share a piece of information, they are presumed to be doing so in an honest fashion. The notion that public figures and professionals are basically trustworthy has been integral to the health of representative democracies. After all, the very core of liberal democracy is the idea that a small group of people – politicians – can represent millions of others.

Nothing turns voters against liberalism more rapidly than the appearance of corruption: the suspicion, valid or otherwise, that politicians are exploiting their power for their own private interest.
in "Why we stopped trusting elites" 29 nov 2018

The political concern right now is that suspicions that the truth is being deliberately hidden by an alliance of "elites" – are no longer the preserve of conspiracy theorists but becoming increasingly common.

This isn’t just about politics: much of what we believe to be true about the world is actually taken on trust, via newspapers, experts, officials and broadcasters. A modern liberal society is a complex web of trust relations, held together by reports, accounts, records and testimonies. The advent of experts and government administrators rested on the assumption that knowledge would reside in public records, newspapers, government files and journals. But once the integrity of these people and these instruments is cast into doubt, an opportunity arises for a new class of political figures and technologies to demand trust instead.

Where whistleblowing and leaking become the dominant form of truth-telling, the authority of professional truth-tellers – reporters, experts, professionals, broadcasters – is thrown into question. What role does this leave for the traditional, analogue purveyors of facts and figures? What does it mean to "report" the news in an age of reflexive disbelief? Newspapers have been grappling with this question for some time now; some have decided to refashion themselves as portals to the raw data, or curators of other people’s content. But it is no longer intuitively obvious to the public why they should be prepared to take a journalist’s word for something, when they can witness the thing itself in digital form.
in "Why we stopped trusting elites" 29 nov 2018

What is emerging now is what the social theorist Michel Foucault would have called a new "regime of truth" – a different way of organising knowledge and trust in society.

The project of trusting elite individuals to know, report and judge things on our behalf, may not be viable in the long term, at least not in its existing form. The main feature of the emerging regime is that truth is now assumed to reside in hidden archives of data, rather than in publicly available facts. The truth was out there, just not in the public domain.

A new type of heroic truth-teller has emerged in tandem with these trends. This is the individual who appears brave enough to call bullshit on the rest of the establishment – whether that be government agencies, newspapers, business, political parties or anything else. Some are whistleblowers, others are political leaders, and others are more like conspiracy theorists or trolls.
in "Why we stopped trusting elites" 29 nov 2018

By lumping together journalists, judges, experts and politicians as a single homogeneous "liberal elite", it is possible to treat them all as indulging in a babble of jargon, political correctness and, ultimately, lies.

A crucial reason liberalism is in danger right now is that the basic honesty of mainstream politicians, journalists and senior officials is no longer taken for granted. Professions whose job it is to report the truth – journalists, experts, officials, suffer a slump in trust. The distinctions between all these fact-peddlers start to look irrelevant in the eyes of those who’ve given up on the establishment altogether.

One thing that these diverse professions and authorities do have in common is that they trade primarily in words and symbols.
in "Why we stopped trusting elites" 29 nov 2018

The credibility of establishment figures has been demolished by technological change and political upheavals. But it’s too late to turn back the clock.
in "Why we stopped trusting elites" 29 nov 2018