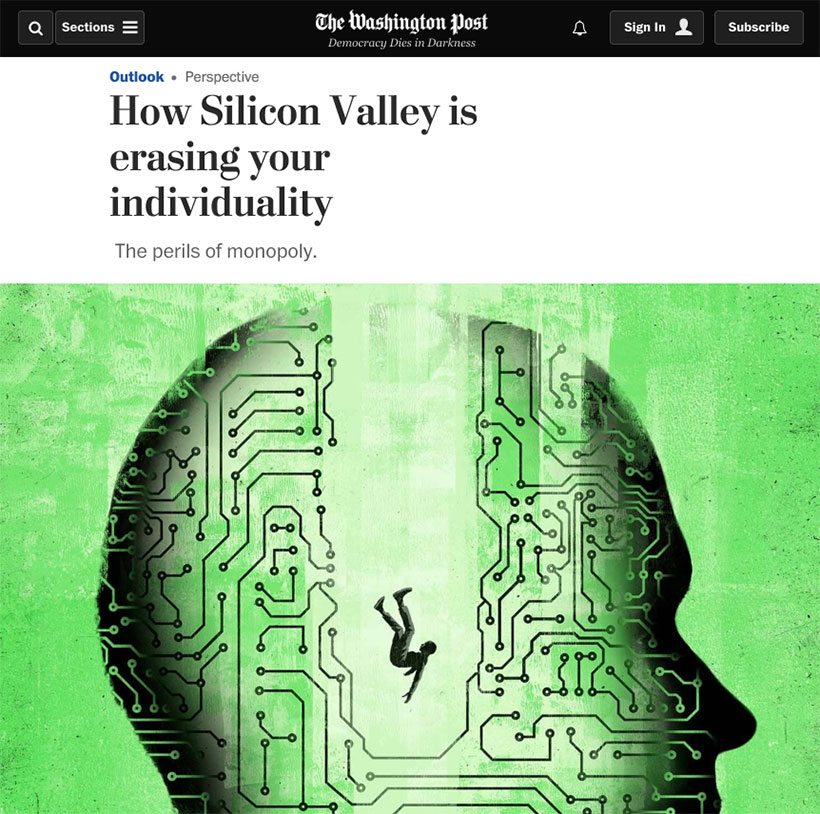 How Silicon Valley is erasing your individuality 8 set 2017

Until recently, it was easy to define our most widely known corporations. Any third-grader could describe their essence. Exxon sells gas; McDonald’s makes hamburgers; Walmart is a place to buy stuff. This is no longer so. Today’s ascendant monopolies aspire to encompass all of existence. Google derives from googol, a number (1 followed by 100 zeros) that mathematicians use as shorthand for unimaginably large quantities. Larry Page and Sergey Brin founded Google with the mission of organizing all knowledge, but that proved too narrow. They now aim to build driverless cars, manufacture phones and conquer death. Amazon, which once called itself “the everything store,” now produces television shows, owns Whole Foods and powers the cloud. The architect of this firm, Jeff Bezos, even owns this newspaper.

Along with Facebook, Microsoft and Apple, these companies are in a race to become our “personal assistant.” They want to wake us in the morning, have their artificial intelligence software guide us through our days and never quite leave our sides. They aspire to become the repository for precious and private items, our calendars and contacts, our photos and documents. They intend for us to turn unthinkingly to them for information and entertainment while they catalogue our intentions and aversions. Google Glass and the Apple Watch prefigure the day when these companies implant their artificial intelligence in our bodies. Brin has mused, “Perhaps in the future, we can attach a little version of Google that you just plug into your brain.”

More than any previous coterie of corporations, the tech monopolies aspire to mold humanity into their desired image of it. They think they have the opportunity to complete the long merger between man and machine — to redirect the trajectory of human evolution. How do I know this? In annual addresses and town hall meetings, the founding fathers of these companies often make big, bold pronouncements about human nature — a view that they intend for the rest of us to adhere to. Page thinks the human body amounts to a basic piece of code: “Your program algorithms aren’t that complicated,” he says. And if humans function like computers, why not hasten the day we become fully cyborg?

To take another grand theory, Facebook chief Mark Zuckerberg has exclaimed his desire to liberate humanity from phoniness, to end the dishonesty of secrets. “The days of you having a different image for your work friends or co-workers and for the other people you know are probably coming to an end pretty quickly,” he has said. “Having two identities for yourself is an example of a lack of integrity.” Of course, that’s both an expression of idealism and an elaborate justification for Facebook’s business model.

There’s an oft-used shorthand for the technologist’s view of the world. It is assumed that libertarianism dominates Silicon Valley, and that isn’t wholly wrong. High-profile devotees of Ayn Rand can be found there. But if you listen hard to the titans of tech, it’s clear that their worldview is something much closer to the opposite of a libertarian’s veneration of the heroic, solitary individual. The big tech companies think we’re fundamentally social beings, born to collective existence. They invest their faith in the network, the wisdom of crowds, collaboration. They harbor a deep desire for the atomistic world to be made whole. (“Facebook stands for bringing us closer together and building a global community,” Zuckerberg wrote in one of his many manifestos.) By stitching the world together, they can cure its ills.

Rhetorically, the tech companies gesture toward individuality — to the empowerment of the “user” — but their worldview rolls over it. Even the ubiquitous invocation of users is telling: a passive, bureaucratic description of us. The big tech companies (the Europeans have lumped them together as GAFA: Google, Apple, Facebook, Amazon) are shredding the principles that protect individuality. Their devices and sites have collapsed privacy; they disrespect the value of authorship, with their hostility toward intellectual property. In the realm of economics, they justify monopoly by suggesting that competition merely distracts from the important problems like erasing language barriers and building artificial brains. Companies should “transcend the daily brute struggle for survival,” as Facebook investor Peter Thiel has put it.

When it comes to the most central tenet of individualism — free will — the tech companies have a different way. They hope to automate the choices, both large and small, we make as we float through the day. It’s their algorithms that suggest the news we read, the goods we buy, the paths we travel, the friends we invite into our circles.

It’s hard not to marvel at these companies and their inventions, which often make life infinitely easier. But we’ve spent too long marveling. The time has arrived to consider the consequences of these monopolies, to reassert our role in determining the human path. Once we cross certain thresholds — once we remake institutions such as media and publishing, once we abandon privacy — there’s no turning back, no restoring our lost individuality.

Over the generations, we’ve been through revolutions like this before. Many years ago, we delighted in the wonders of TV dinners and the other newfangled foods that suddenly filled our kitchens: slices of cheese encased in plastic, oozing pizzas that emerged from a crust of ice, bags of crunchy tater tots. In the history of man, these seemed like breakthrough innovations. Time-consuming tasks — shopping for ingredients, tediously preparing a recipe and tackling a trail of pots and pans — were suddenly and miraculously consigned to history.

The revolution in cuisine wasn’t just enthralling. It was transformational. New products embedded themselves deeply in everyday life, so much so that it took decades for us to understand the price we paid for their convenience, efficiency and abundance. Processed foods were feats of engineering, all right — but they were engineered to make us fat. Their delectable taste required massive quantities of sodium and sizable stockpiles of sugar, which happened to reset our palates and made it harder to sate hunger. It took vast quantities of meat and corn to fabricate these dishes, and a spike in demand remade American agriculture at a terrible environmental cost. A whole new system of industrial farming emerged, with penny-conscious conglomerates cramming chickens into feces-covered pens and stuffing them full of antibiotics. By the time we came to understand the consequences of our revised patterns of consumption, the damage had been done to our waistlines, longevity, souls and planet.

Something like the midcentury food revolution is now reordering the production and consumption of knowledge. Our intellectual habits are being scrambled by the dominant firms. Giant tech companies have become the most powerful gatekeepers the world has ever known. Google helps us sort the Internet, by providing a sense of hierarchy to information; Facebook uses its algorithms and its intricate understanding of our social circles to filter the news we encounter; Amazon bestrides book publishing with its overwhelming hold on that market.

Such dominance endows these companies with the ability to remake the markets they control. As with the food giants, the big tech companies have given rise to a new science that aims to construct products that pander to their consumers. Unlike the market research and television ratings of the past, the tech companies have a bottomless collection of data, acquired as they track our travels across the Web, storing every shard about our habits in the hope that they may prove useful. They have compiled an intimate portrait of the psyche of each user — a portrait that they hope to exploit to seduce us into a compulsive spree of binge clicking and watching. And it works: On average, each Facebook user spends one-sixteenth of their day on the site.

In the realm of knowledge, monopoly and conformism are inseparable perils. The danger is that these firms will inadvertently use their dominance to squash diversity of opinion and taste. Concentration is followed by homogenization. As news media outlets have come to depend heavily on Facebook and Google for traffic — and therefore revenue — they have rushed to produce articles that will flourish on those platforms. This leads to a duplication of the news like never before, with scores of sites across the Internet piling onto the same daily outrage. It’s why a picture of a mysteriously colored dress generated endless articles, why seemingly every site recaps “Game of Thrones.” Each contribution to the genre adds little, except clicks. Old media had a pack mentality, too, but the Internet promised something much different. And the prevalence of so much data makes the temptation to pander even greater.

This is true of politics. Our era is defined by polarization, warring ideological gangs that yield no ground. Division, however, isn’t the root cause of our unworkable system. There are many causes, but a primary problem is conformism. Facebook has nurtured two hive minds, each residing in an informational ecosystem that yields head-nodding agreement and penalizes dissenting views. This is the phenomenon that the entrepreneur and author Eli Pariser famously termed the “Filter Bubble” — how Facebook mines our data to keep giving us the news and information we crave, creating a feedback loop that pushes us deeper and deeper into our own amen corners.

As the 2016 presidential election so graphically illustrated, a hive mind is an intellectually incapacitated one, with diminishing ability to tell fact from fiction, with an unshakable bias toward party line. The Russians understood this, which is why they invested so successfully in spreading dubious agitprop via Facebook. And it’s why a raft of companies sprouted — Occupy Democrats, the Angry Patriot, Being Liberal — to get rich off the Filter Bubble and to exploit our susceptibility to the lowest-quality news, if you can call it that.

Facebook represents a dangerous deviation in media history. Once upon a time, elites proudly viewed themselves as gatekeepers. They could be sycophantic to power and snobbish, but they also felt duty-bound to elevate the standards of society and readers. Executives of Silicon Valley regard gatekeeping as the stodgy enemy of innovation — they see themselves as more neutral, scientific and responsive to the market than the elites they replaced — a perspective that obscures their own power and responsibilities. So instead of shaping public opinion, they exploit the public’s worst tendencies, its tribalism and paranoia.

During this century, we largely have treated Silicon Valley as a force beyond our control. A broad consensus held that lead-footed government could never keep pace with the dynamism of technology. By the time government acted against a tech monopoly, a kid in a garage would have already concocted some innovation to upend the market. Or, as Google’s Eric Schmidt, put it, “Competition is one click away.” A nostrum that suggested that the very structure of the Internet defied our historic concern for monopoly.

As individuals, we have similarly accepted the omnipresence of the big tech companies as a fait accompli. We’ve enjoyed their free products and next-day delivery with only a nagging sense that we may be surrendering something important. Such blitheness can no longer be sustained. Privacy won’t survive the present trajectory of technology — and with the sense of being perpetually watched, humans will behave more cautiously, less subversively. Our ideas about the competitive marketplace are at risk. With a decreasing prospect of toppling the giants, entrepreneurs won’t bother to risk starting new firms, a primary source of jobs and innovation. And the proliferation of falsehoods and conspiracies through social media, the dissipation of our common basis for fact, is creating conditions ripe for authoritarianism. Over time, the long merger of man and machine has worked out pretty well for man. But we’re drifting into a new era, when that merger threatens the individual. We’re drifting toward monopoly, conformism, their machines. Perhaps it’s time we steer our course.