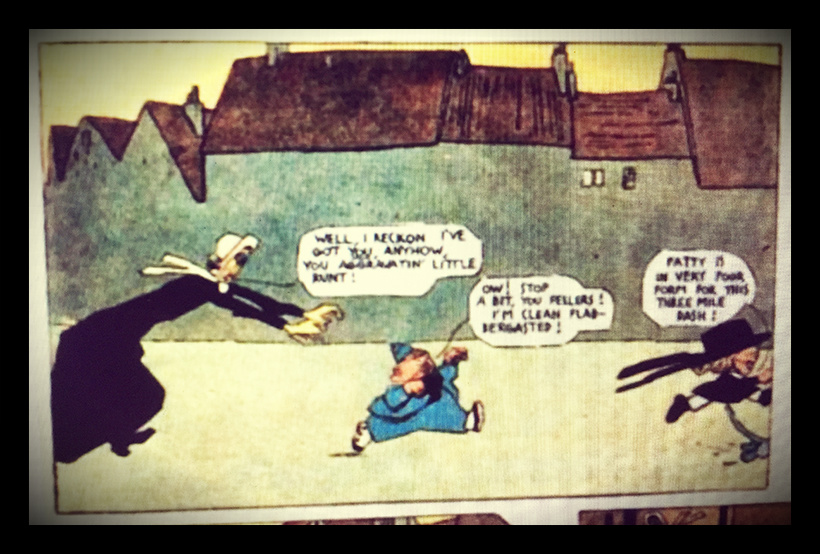 If we often wonder why even great comics feel so marginal alongside film or painting, our obsession with one type of cartooning above all others might be part of the reason. Comics seems to react in an extremely hostile way to people who break with the unwritten rules.
in "Feininger’s Grandkids" 20 nov 2017

Which makes more sense to people in general? The one that uses panel grids and loves (…) simplicity? Or the one that doesn’t emulate any master but instead uses words and pictures in the way that they must be used for this specific narrative?
in "Feininger’s Grandkids" 20 nov 2017 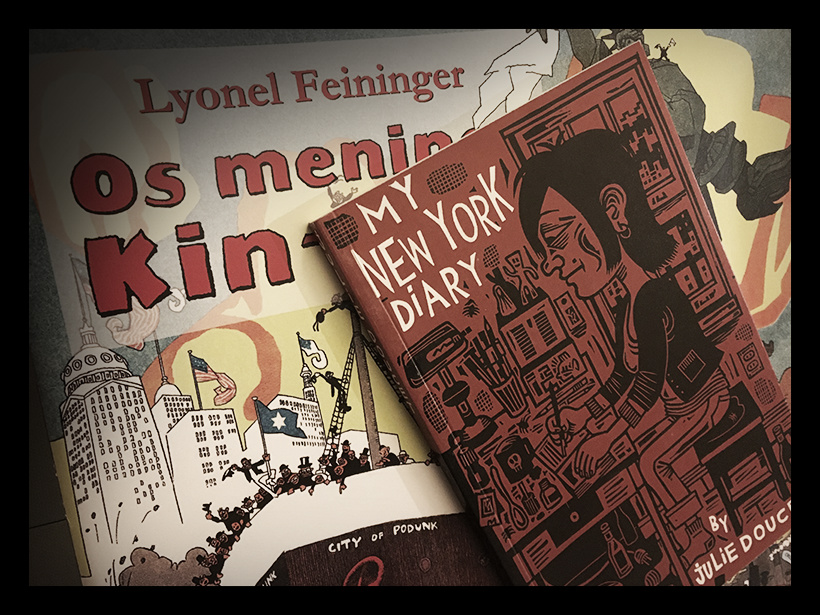 The comics and zines from this era and movement are considered fringe in terms of what the medium "is." Some readers even considered them offensive affronts against the very idea of cartooning, rolling their eyes at self-indulgent experimentation. This points to how conservative "alternative comics" was even in the last decade, and continues to be. Art cartooning is still judged successful when most of the things Kirby did are applied to non-genre topics. Emotional and intellectual themes are where a serious cartoonist should apply themselves, as long as grids and clear storytelling are adhered to.
in "Feininger’s Grandkids" 20 nov 2017

Edward Gorey could arguably be the most read cartoonist of all time. His work is rightly held in clear storytelling. Gorey’s surrealism qualifies him as of the select few artists who use words and pictures in as intellectually and emotionally expansive way as possible. And for this, the world embraces Gorey, an undeniable treasure of American arts. Comics, of course, omits him from the Eisner Hall of Fame because… he didn’t work with a grid? The text is… on the other page? The argument cannot be made that Gorey’s text and images can be separated, thus making him a true blue cartoonist. And yet…

Shel Silverstein might be a possible rival to Gorey for the "most widely read" cartoonist title. Even the most conservative comics person can see the skill in a Silverstein drawing, still, not only is Silverstein absent alongside Gorey from the Eisner Hall of Fame, he didn’t make the far more progressively minded Comics Journal Top 100 list in 1999.
in "Feininger’s Grandkids" 20 nov 2017

Why does comics shy away from them?

What is "cartooning?" It means different things in different milieus of the comic-book world.

For readers of this website, and for the artists of the past that shaped the aesthetics that this publication champions, "cartooning" means combining all three practices (writer, penciler, inker — with "inking" being either assumed or not applicable). This would, in theory, provide a rather wide tent for what this art form can mean. Words and pictures in some degree of cooperation.

But the discussion of cartooning is, of course, far more conservative than that.

While all approaches are encouraged or paid lip service to, a "true cartoonist" is defined rather narrowly. What is this generally agreed on notion of orthodox cartooning? If you want orthodox, I think Jack Kirby.
in "Feininger’s Grandkids" 20 nov 2017

Monster Magnet sayz ♪ ...I was thinking how the world should have cried ♪ On the day Jack Kirby died... ♪ :

Every gesture, emotion, plot point is unambiguous. Nothing is left to (mis)interpretation. Kirby knows how reduce [tudo] to a coherent world of icons, [tudo tem] a correct way of being rendered and communicated within Kirby’s visual world. Everything is reduced to a certain level of visual complexity so as to achieve a reality that synthesizes from top to bottom. Imagine something, imagine anything… it’s easy to conjure up in your mind how Kirby would draw it. Kirby knew how to borrow cinematic techniques. He crops his characters, sets up "shots," and establishes location for maximum clear storytelling: the interest here is telling a story solidly and clearly, using whatever effective methods exist.
in "Feininger’s Grandkids" 20 nov 2017

The beginnings of comics resemble the contemporary avant-garde very closely [&] the promise and visual exuberance of early comics has been explored now for decades within cartooning, but mostly regulated to the underground.

Early newspaper cartooning, takes everyone’s breath away, but feels like a medium from a different universe. There’s no grid, the cartoons lack strict "cartoon integrity" (meaning they look exactly the same from the first panel to the last), and the narrative drive is off-kilter at best, non-existent at worse. Feininger’s characters aren’t engaged in a simulation of reality, and their purpose isn’t to tell you a clear story. Instead, they offer a different view of what cartooning could have been. Movement, exploring environments, sounds, color are what’s happening here. And the loose narrative whips you around a world to confront you with these sensations. A static image or painting would bring you one arrangement of these experiences. But a comic with these elements in play allows for a richer template and for the experiences to be controlled through time and space.
in "Feininger’s Grandkids" 20 nov 2017

The beauty and visceral punch of early newspaper strips was very much part of the publication. Just because cinema happens to exist when these comics are made doesn’t mean film needs to be a concern for cartooning. The free-of-cinema work of Feininger feels more relevant within these pages.
in "Feininger’s Grandkids" 20 nov 2017

With a growing community of artists making comics completely on their own terms, an acknowledgement that in the tree of cartooning, Kirby and Iannone are equally strong branches might be a good start. These days, we often talk about encouraging artists with the logistical support of comics shows, community, and payment. But proclaiming the open promise of cartooning loudly and passionately might be just as important in keeping some people who belong here committed to their project.
in "Feininger’s Grandkids" 20 nov 2017 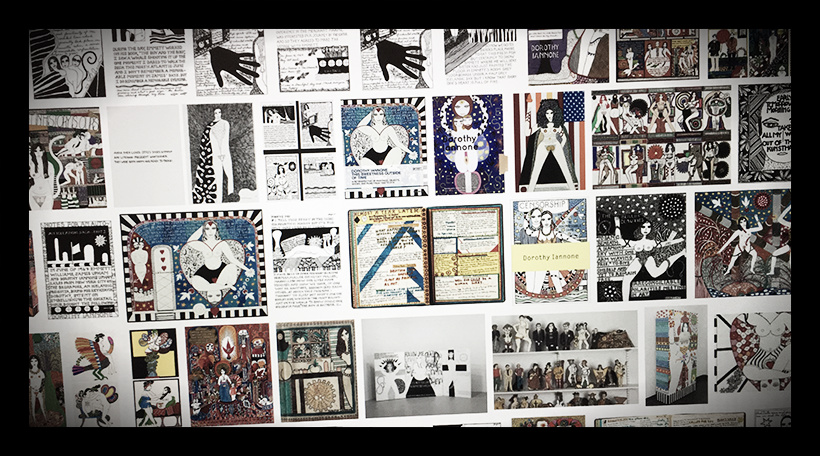 Iannone tells autobiographical stories about her life with words and pictures that cannot be separated. The situations in her work are far more heartbreaking, the emotions they illicit cut deeper. Iannone’s An Icelandic Journey, we see real emotional honesty as the collapse of one relationship and the beginning of another is chronicled. Comics associates honestly with cringe-worthy shock, Iannone with awareness of the complexity of feeling.
in "Feininger’s Grandkids" 20 nov 2017

I have a personal theory as to why Doucet abandoned comics, Doucet, being a extremely sophisticated artist, continued to sharpen and evolve. Her mature comics work, My New York Diary, is as sharp a piece of traditional cartooning as one can find in the alternative era. But after that story, Doucet leaves comics.

My theory is that Doucet looks at what people define "real" comics as, pushes her work in that direction, and thinks, "Well… why bother with all this if this is what people want?"

I’d argue that the comics community’s view of what a serious artist must apply themselves to is a pressure that doesn’t need to be grafted on to every artist. Someone like Doucet can master the ins and outs of traditional cartoon integrity but probably notices quicker than most what a closed system it is, how much feeling it excludes and how much one gives up to offer one’s entire art up to it.
in "Feininger’s Grandkids" 20 nov 2017

I think advocating for approaches that don’t cohere with Kirby or Schulz or DeCarlo is important in building a commitment within developing artists to outdo themselves within the set of rules that they have established for themselves.
in "Feininger’s Grandkids" 20 nov 2017

You’re focusing on form and style and canon, I guess, but a variable that feels missing to me is identity.
in "Feininger’s Grandkids" 20 nov 2017 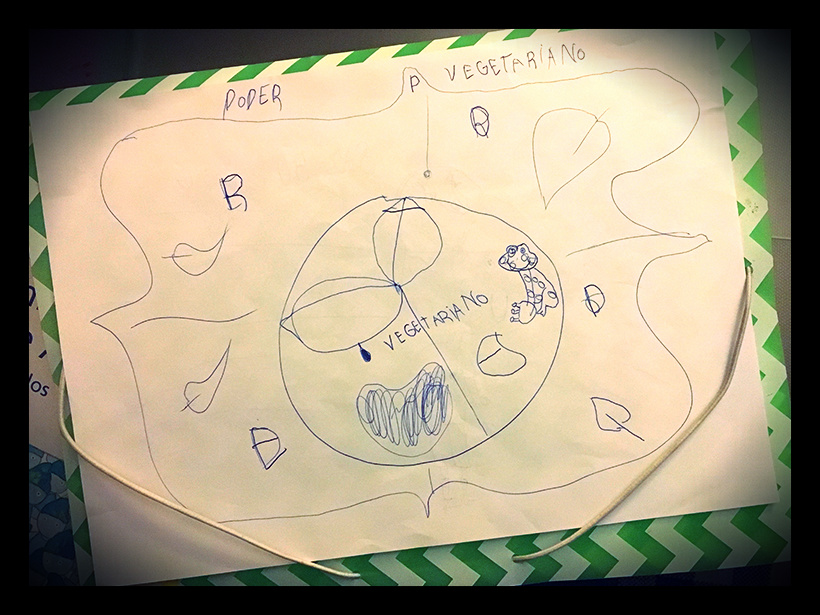 tha wee-one is strong on identity!