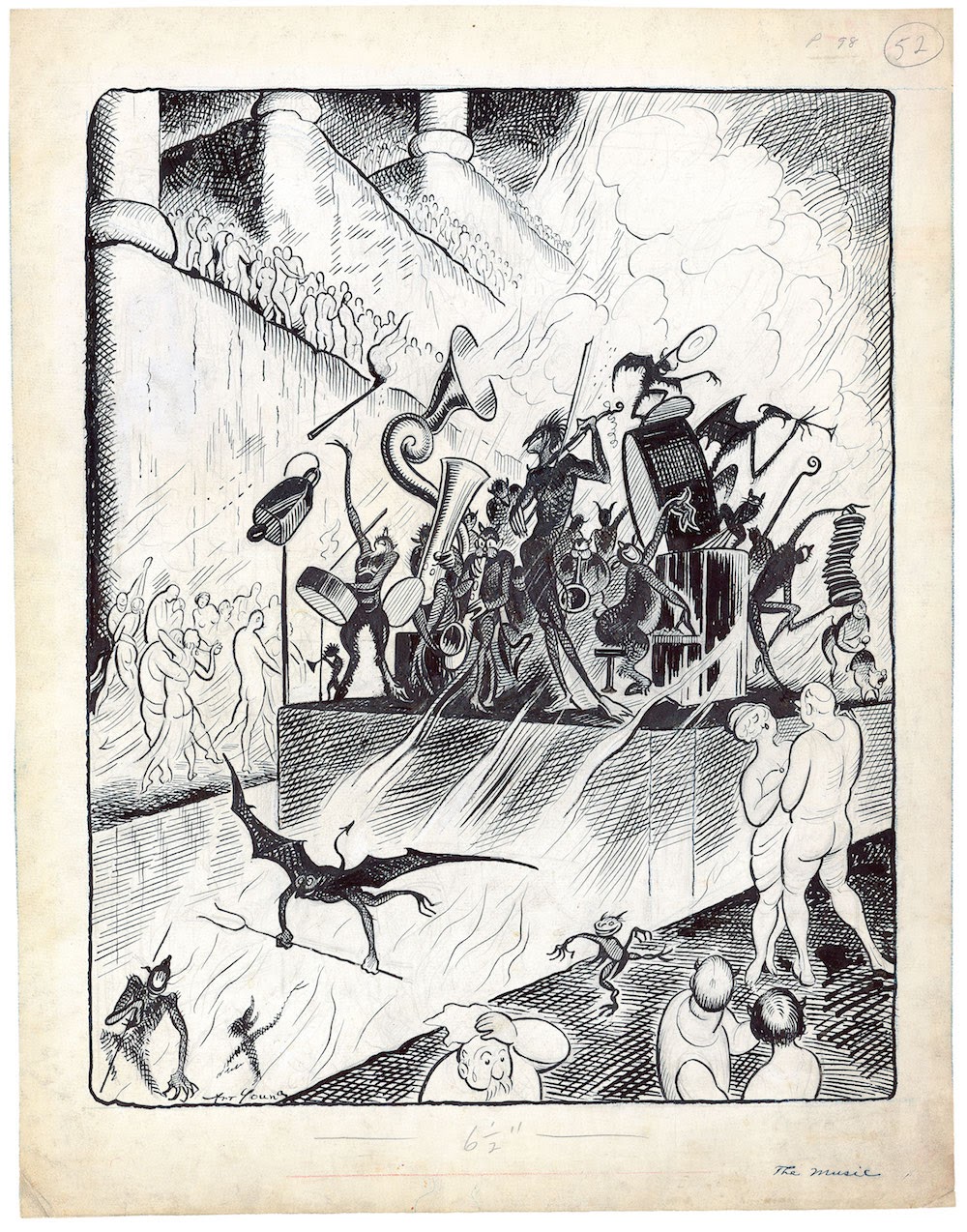 "I wanted those damned DEVILS!"

Arthur Henry Young was the most widely recognized and beloved cartoonist of the golden age of American radicalism. Nearly unique in the history of political cartooning and the American Left, as an artist Art Young was capable of leading a mass anti-capitalist movement while also reaching deep into the mainstream of American media.
in Cartooning Capitalism" s/d

It took me awhile to really understand how "modern" his style was.

The message of Young’s work struck me. It wasn’t only about the artwork. This work was alive and relevant. I had to keep reminding myself that most of these pieces were approaching 100 years old. This sudden exposure to a sleeping giant was powerful.
in "Art Young, To Laugh That We May Not Weep: A Conversation with Glenn Bray and Frank M. Young" 14 set 2017

I never fully understood the patriotic and xenophobic hysteria that hit World War I-era America until I researched the details of Art Young’s trials. The accounts of intense xenophobia and the rhapsodic propaganda seemed familiar.

The most powerful lesson, overall, was my understanding that history seems doomed to repeat itself in America. Our people and politicians make the same bad choices, with the same bad effects, and it seems no lesson is ever learned. That is why so many of Art Young’s cartoons could be run on today’s op-ed page of the newspaper.
in "Art Young, To Laugh That We May Not Weep: A Conversation with Glenn Bray and Frank M. Young" 14 set 2017

(Assuming any papers still exist with the guts to print his work)
in "Art Young, To Laugh That We May Not Weep: A Conversation with Glenn Bray and Frank M. Young" 14 set 2017

Who was Art Young? (As a 20th century political artist and as a voice of conscience?)
Art Young is a prime example of the gentle but powerful voice sometimes seen in American media. He never raises his voice to the shout level we’re used to in 2017 mass media. He makes his points persuasively but allows the viewer to draw their own conclusion. There is always a sense of the human comedy, and of careful consideration of the entire issue.

Art Young’s humanity —the soul of kindness— offers us a sense of hope as it acknowledges the train-wreck around us. 2017 has been a nightmarish year, but a study of Art Young’s work reassures us that America has been through similar horrors and survived. While there is an understandable lessening of hope (...) here is still hope. To realize that hope, we must be more humane beings. We must step back from corporatization, mindless consumption, greed and the hard shell we put around ourselves and be decent, caring individuals.
in "Art Young, To Laugh That We May Not Weep: A Conversation with Glenn Bray and Frank M. Young" 14 set 2017

Art Young shows us one way to speak up without ranting or foaming at the mouth. Most of us experience political discourse via rants and ravings on Facebook, which may turn out to be the worst possible forum for such a discussion. Instead of shouting matches or physical conflicts, I wish the antifa protesters would paper buildings with blow-ups of Art Young cartoons (*) Que, sempre importante, aquilo do $$$, recorda o autor com mais um parentesis: "(these images are in the public domain, gang, so go for it!)" — or create new work inspired by Young’s voice.
in "Art Young, To Laugh That We May Not Weep: A Conversation with Glenn Bray and Frank M. Young" 14 set 2017

Nowadays, satire and ridicule have effectively moved to late-night TV comedy, but it’s the cartoon’s ability to essentialize that we so sorely need now. The Occupy movement might’ve had longer legs if it only had a great T-shirt designed by Art Young.
in "To Laugh That We May Not Weep" 2016

Art Young? He was the greatest radical political cartoonist in our history.
in "To Laugh That We May Not Weep" 2016 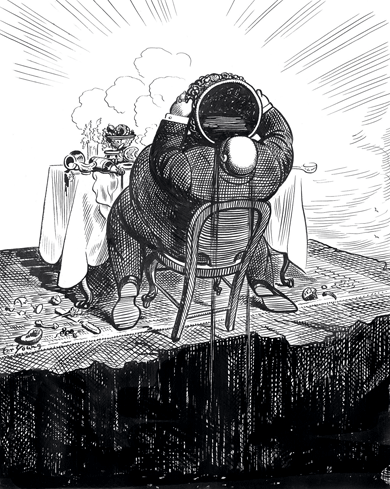 He happily accepted the term "propaganda" to describe his work, which he saw simply as propagating his own ideas.
in "To Laugh That We May Not Weep" 2016

His contempt was reserved for the editorial prostitution involved in drawing for an editor’s convictions rather than one’s own.
in "To Laugh That We May Not Weep" 2016

He’d studied to be a painter, but said he preferred a large audience to being displayed on a rich man’s walls. He was impatient with pictures that didn’t make a clear point.
in "To Laugh That We May Not Weep" 2016

Young confessed that he didn’t have convictions until he was about forty, when he put his mouth where his money wasn’t — refusing lucrative commissions from mainstream magazines and newspapers to take the vow of poverty that comes with working for the radical press.
in "To Laugh That We May Not Weep" 2016

I am antagonistic to the money-making fetish because it sidetracks our natural selves, leaving us no alternative but to accept the situation and take any kind of work for a weekly wage [...] We are caught and hurt by the system, and the more sensitive we are to life's highest values the harder it is to bear the abuse.
in Wikipedia set 2017

[The] difficult process as making an image that, once seen, can never be unseen: Young was a world-class master at distilling his thoughts into unforgettable formulations. A cartoon’s power derives from its capacity to echo the ways our brains work. We think in small bursts of language and in stripped-down icons.

Unfortunately, political cartooning, like socialism, has fallen on hard times, and Art Young’s job description no longer really exists: A Radical! Political!! Cartoonist!!! "Political": The word evokes C-SPAN–scale boredom and clouds of toxic rhetoric. The only concept less inviting is "political radical," which conjures up images of dangerous bomb-throwing anarchists — what could be worse? Oh, I know: Cartoonist! A creator of trivial diversions, only worth the time more fruitfully spent dozing if the creator is (a) hilarious, (b) salacious, or, preferably, (c) both. In fact, one of the few phrases more snooze-worthy than "political" may be "political cartoonist".
in "To Laugh That We May Not Weep" 2016

I became more interested in Art Young via his original artwork, rather than the printed page.
in "Art Young, To Laugh That We May Not Weep: A Conversation with Glenn Bray and Frank M. Young" 14 set 2017

Young’s ability to hate the sin but not the sinner arises from his deeply ingrained sense of humor.
in "To Laugh That We May Not Weep" 2016

Because he kept his eye on the fundamentals, his cartoons are rarely musty artifacts from yesterday’s papers but seem like urgent dispatches from tomorrow’s news.

His ability to boil complex social issues down to memorable symbols, drawn with justifiable anger but permeated with genial warmth, would be an immeasurable asset to explaining the realities of today’s class war to its casualties.
in "To Laugh That We May Not Weep" 2016 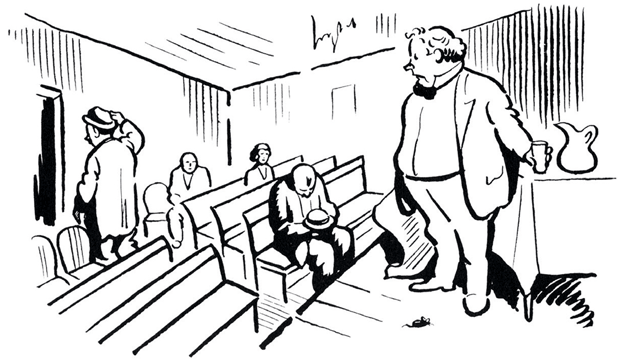 "The Uprising of the Proletariat"