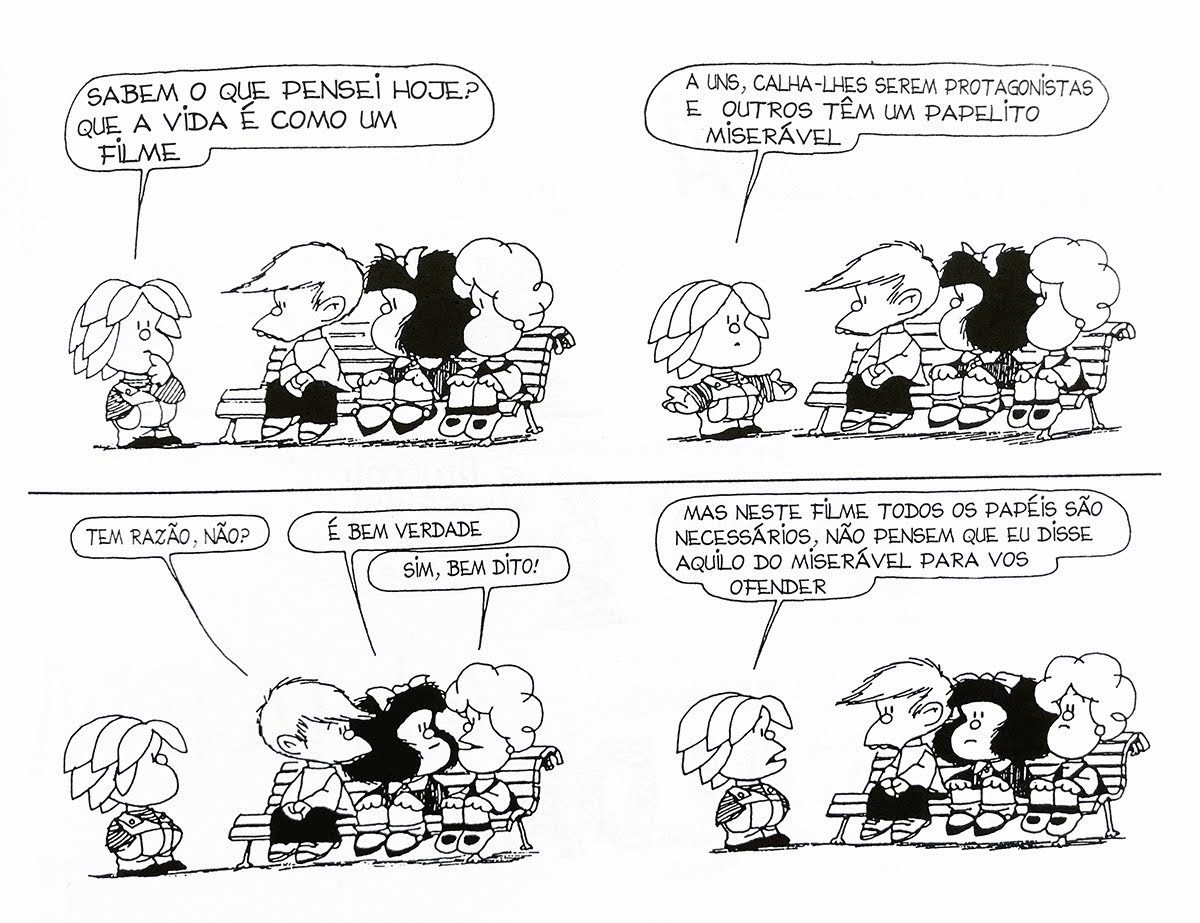 Acrescentamos mashup da melhor resumo lido neste dia: "From Mafalda with love: three lessons from the late Quino and his immortal creation" 1 out 2020:

I personally owe much of the awakening of my political consciousness and rebelliousness to Quino’s black-and-white comic strips.

Comics and cartoons have a long tradition in fostering social critique and stirring up activism, and for me it is one of Quino’s most powerful legacies. [...] Mafalda makes us question what we take for granted, and in a very touching way expresses her dissatisfaction with what she calls the “disastrous” state of the world. [...] Umberto Eco noted that Mafalda, as a young girl, has the privilege of childhood innocence, allowing her to question the world. This in turn triggers deeper questions in adults about how they’ve abandoned their ability to be imaginative and reflexive.

By using satire, Quino often leaves us with open, provocative and often desolating questions, where Mafalda wonders why reasoning and common sense are so hard to find. In so doing, she highlights how being “rational” is not only – as we are made to believe – to be self-interested and calculating. Reason is not opposed to emotion and affectivity, and there are other forms of rationality that foster relationality. [...] This joins the general aim of critical scholars, who seek to uncover the mechanisms of domination and exploitation that control not only our societies, but more importantly the production of knowledge itself. [...] It is through such critical thinking that as individuals and as social groups we can imagine alternative ways of living our lives instead of having them being dictated by institutions.

Through his art, Quino engaged in pointed social critique on a wide range of topics – the state of the world, politics, cliches and prejudices, the middle-class family, social relationships, food and art – where visual and verbal humour played a central role. [...] Quino’s brilliant use of humour can teach us at least three lessons to help us reconnect with our inner affective lives and with others. First, that humour can trigger critical thinking. Second, that humour can foster ethical relationships to others. And third, that humour can powerfully encourage resistance to oppression.

The ability to question the world and society through critical thinking is often present in Quino’s drawings regarding the ways in which we relate to each other : such relationships are often odd, problematic, messy, unbalanced, but in the end that is what makes them undoubtedly human.
in "From Mafalda with love: three lessons from the late Quino and his immortal creation" 1 out 2020