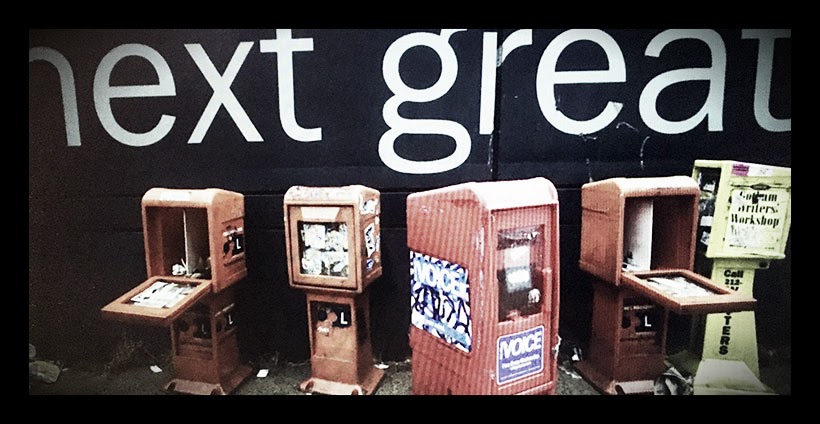 The history of the Village Voice, New York’s free culture newspaper, is a perfect microcosm of media evolution from print to digital. Founded in 1955, it became a powerful voice for “the counter culture” in the tumultuous 60s, and the only way to find an apartment in the 90s via its classifieds. Then came digital, the paper changed hands several times while shrinking to an anorexic tabloid. The once ubiquitous kiosks where it was given away for free are mostly used as receptacle for homeless people’s detritus now. Along the way comics were one of the Voice’s best known features. Jules Feiffer, Ben Katchor, Tom Tomorrow, Lynda Barry and many more were among the defining commenters on their times. But those too dwindled away, the victim of budget cuts.
in "Shocker: The Village Voice is publishing comics again with Weinstein and Stevens" 11 set 2016

The death of the print edition of the Village Voice is being widely eulogized as the end of an era.
in "What Cities Lose When an Alt-Weekly Dies" 23 ago 2017

The announcement is a symbolic blow for alternative weeklies across the United States, which have endured successive cuts and closures in recent years as print advertising revenue has dried up. Alt-weeklies have weathered serious financial headwinds that have sapped their newsrooms and depleted their ranks. Several notable alternative publications all folded in the last half-decade as decreasing revenue and circulation took their collective toll.
in "After more than half a century, The Village Voice is closing its print edition" 22 ago 2017

Without it, if you are a New Yorker of a certain age, chances are you would have never found your first apartment. Never discovered your favorite punk band, spouted your first post-Structuralist literary jargon, bought that unfortunate futon sofá. The print pages of The Village Voice were a place to discover Jacques Derrida or phone sex services. Marginal tastes in the arts or ideology flourished, often in language that readers armed only with graduate degrees could understand.
in "After 62 Years and Many Battles, Village Voice Will End Print Publication" 23 ago 2017

The thing the Voice and its descendants gave readers was something more important than the occasional scoop: they served as critical conveyors of regional lore and scuttlebutt and intel. Dailies may have told you what was going on; alt-weeklies helped make people locals, a cranky cohort united by common enthusiasms and grievances. The alternative media was the informal archive of the city’s id, a catalog of fandom and contempt that limned the contours of the populace. They showed you filthy drawings, amazing bands, local oddballs, and everything else that a straight newspaper wouldn’t, or couldn’t. And they did it for free, asking only for your forbearance as you waded through the 1-900 sex-line ads and adult services listings that paid for the forests of newsprint.
in "What Cities Lose When an Alt-Weekly Dies" 23 ago 2017

And this part of their role, as it turns out, is a lot harder to replace in the digital era. The migration to digital and the rise of social media atomized this audience, and the online startups that have emerged since have not been able to reassemble it.
in "What Cities Lose When an Alt-Weekly Dies" 23 ago 2017

Alt-weeklies were never all that big on actual news.

In a pre-internet era, the weekly publishing schedule meant that most alt-weekly writers were free to roam about gathering string for eccentric features of their own devising, untethered to news cycles or any other outside logic. News was something of an accidental byproduct of this process.
in "What Cities Lose When an Alt-Weekly Dies" 23 ago 2017

The newspaper business has moved online and so has The Voice’s audience, “which expects us to do what we do not just once a week, but every day, across a range of media”.
in "After 62 Years and Many Battles, Village Voice Will End Print Publication" 23 ago 2017

But the printed paper was also an artifact of a downtown world that no longer exists.
in "After 62 Years and Many Battles, Village Voice Will End Print Publication" 23 ago 2017

The bittersweet fact is that we’re saying goodbye to another link with history.

Before the internet, The Village Voice was one of those portals that gave you a taste of certain literary trends and urban happenings. It was fun to pore over the pages and even to simply handle this object made of paper. But no longer can you read new print issues, only digital moving forward. Absolutely no more paper copies! Is this really news? I’m not sure that it is as this transition from print to digital has been steadily going on for years. Just like typewriters and phone booths became extinct, so too will all print newspapers bite the dust.

For those of you who did not grow up with newspapers, you’re probably wondering what the big fuss is over. Newspapers, just like magazines, used to be far more powerful and influential. People took far more notice of them and relied upon them. Eyes lingered longer on the text, the photographs, the illustrations, and the comic strips!

For some steadfast followers of pop culture, they would like to claim some greater significance to the death of the print version of The Village Voice. To be sure, it does seem to be heart-breaking. But, let’s get a grip. All content moving forward is now digital and that’s great.

Now, don’t get me wrong. I know there are plenty of nerds among us, and I count myself within this group, that can’t help but want to get all sentimental about such things as newspapers. Well, resist that urge.

The practical concern over the shift from print to digital is about the various features in the print version surviving the transition. If a content provider is creating compelling content, then that content is going to find an audience, and it will survive the great transition.

The publications that are least financially stable will drop out of the print game even sooner. The alt-weeklies, which many of us cherished in our youth, will concede to only being digital (...) with their weekly print version only serving as a recap of what appeared on the screen that week.
in "Village Voice Moves From Print to Digital" 25 ago 2017

Getting back to the features that used to have a secure home in print: the creators of observation pieces and comics should follow their heart as best they can if they can’t follow their wallet. Start a blog. In the age of newspapers, you had to tap dance, beg, and plead to join the party. Those days are over! To all you heavy sentimentalists, don’t forget, we are well into a new century. Dry off those tears. The Village Voice is still alive in the format for a new age. The print version was your dad’s Village Voice. Sorry, but we can only move forward.
in "Village Voice Moves From Print to Digital" 25 ago 2017

All these empty boxes on so many street corners stand as a stark warning: think about all the voices that you just stopped hearing, and ask yourself where they all went
in "What Cities Lose When an Alt-Weekly Dies" 23 ago 2017