I've done a zillion zines so far, and I tend to come by them so fast some people wonder how I manage.

Having started my zines in the late 90's, I did them like everybody else back it the day: cheap, black and white copies on a xerox machine, hand folded one at a time — and if I was in the mood I'd even stapled a few. Computers weren't exactly scarce but they weren't also a sure thing like they are today, so you wouldn't print your zines on your printer unless you were fucking rich as fuck. Or had a printer. With picture quality. Greyscale, forget color.

On my first zine run alone, I did a total of more than 500 pages worth of comics. Multiply those pages for every copy, and you get a sense of how many trees I owe the planet. But also, I'd be holding a big fuckin' bill if I wasnt going to get resourceful, so along with the trees, I had to cut down on the costs.

So I got used to be on the look out for copying machines around me.

Everybody in this game knows the score: you'd ask your friends and family to copy your zines if they had access to a xerox machine. Everyone has some story on how they would use their lunch break to copy zines at the office, or how they would work weekends and late night shifts just to stay behind and copy more zines. It's hard to explain to the kids today but way before these digital times, a copying machine was a real big-big deal.

Over the years printers became more wide spread, cheaper, faster, and with better quality. So I started to be on the look out for those too. And for way-way many years, this was my office crush: It may seem just another dumb stupid printer now, but it wasn't. It quietly did the one thing no other printer did: it printed two sides on one go, and we're talking turn of the century… Let me put it this way: two side print is a big feature on printers TODAY! I don't know how that went unnoticed at work but I guess no one really cared, but me :) Many times the IT guys tried to "upgrade" my printer and they would think I was just being weird for not wanting to change printers, but I knew the potential of two side printing…

Than one day the order came down: all printers were to go! They were being decommissioned and everybody would have to share a copy machine. Well, two things: a) I got a copying machine! b) "what printer?" "your printer…" "no dude… what printer?" "I gotta take your printer" "you're not listening to me… what printer?" "oh… ok, keep it, what do I care…" So I had the best of both worlds.

I still have this printer in my office to this day, nicely tucked away on a desk. Sure, it's worthless now, but I like having it around, I like to have options :)

But, getting along with this story, so now I also have this: 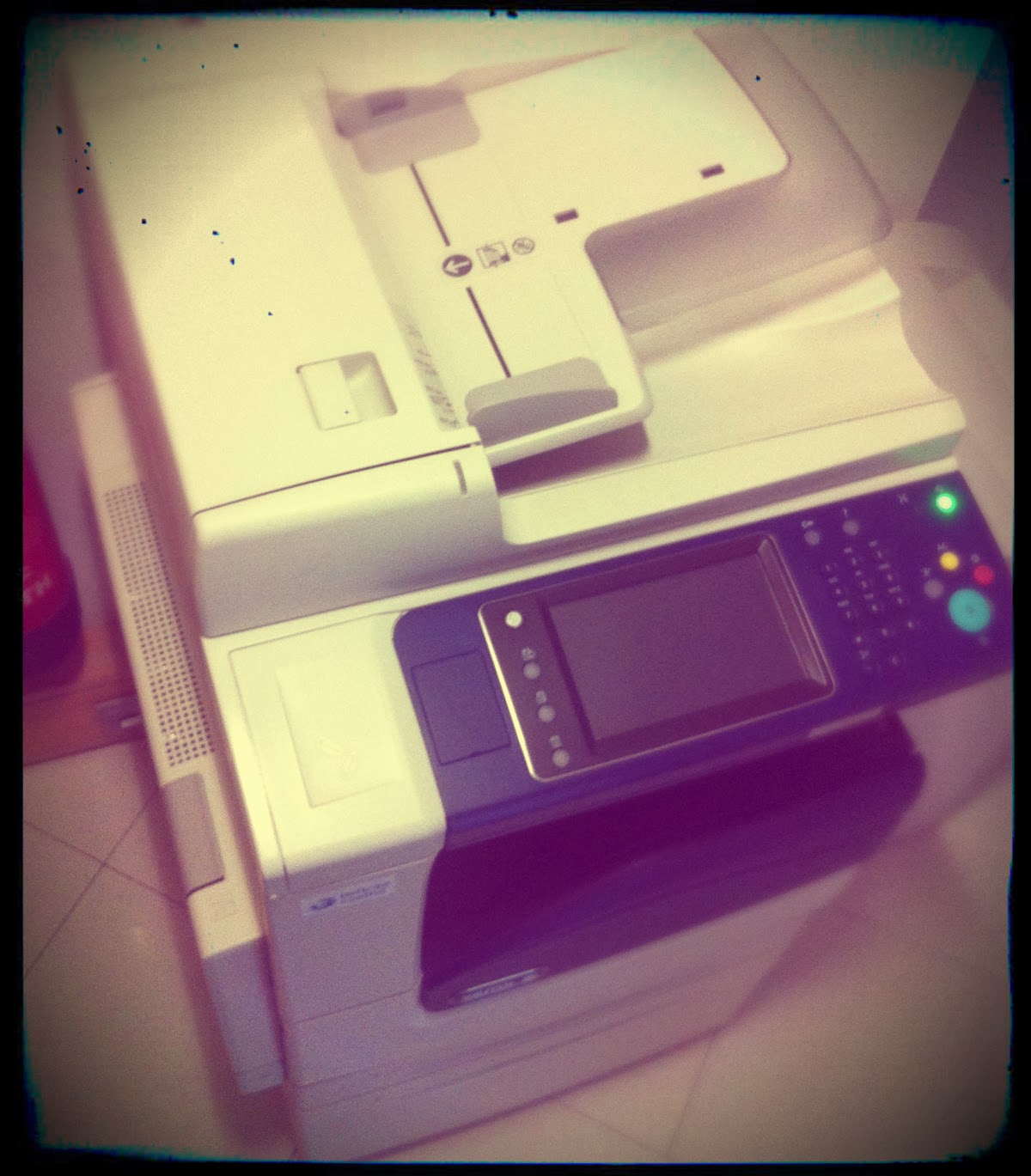 Something something about horses and their teeth, and I'm not complaining, I'm really glad to have this baby around too, but the xeroxing  days are gone. And I got the taste of color, how can I go back? Sure, I still draw my comics black and white, it's my thing, but like I said, I want to have options, and that machine gives me little options.

Unlike, uh, this one here: 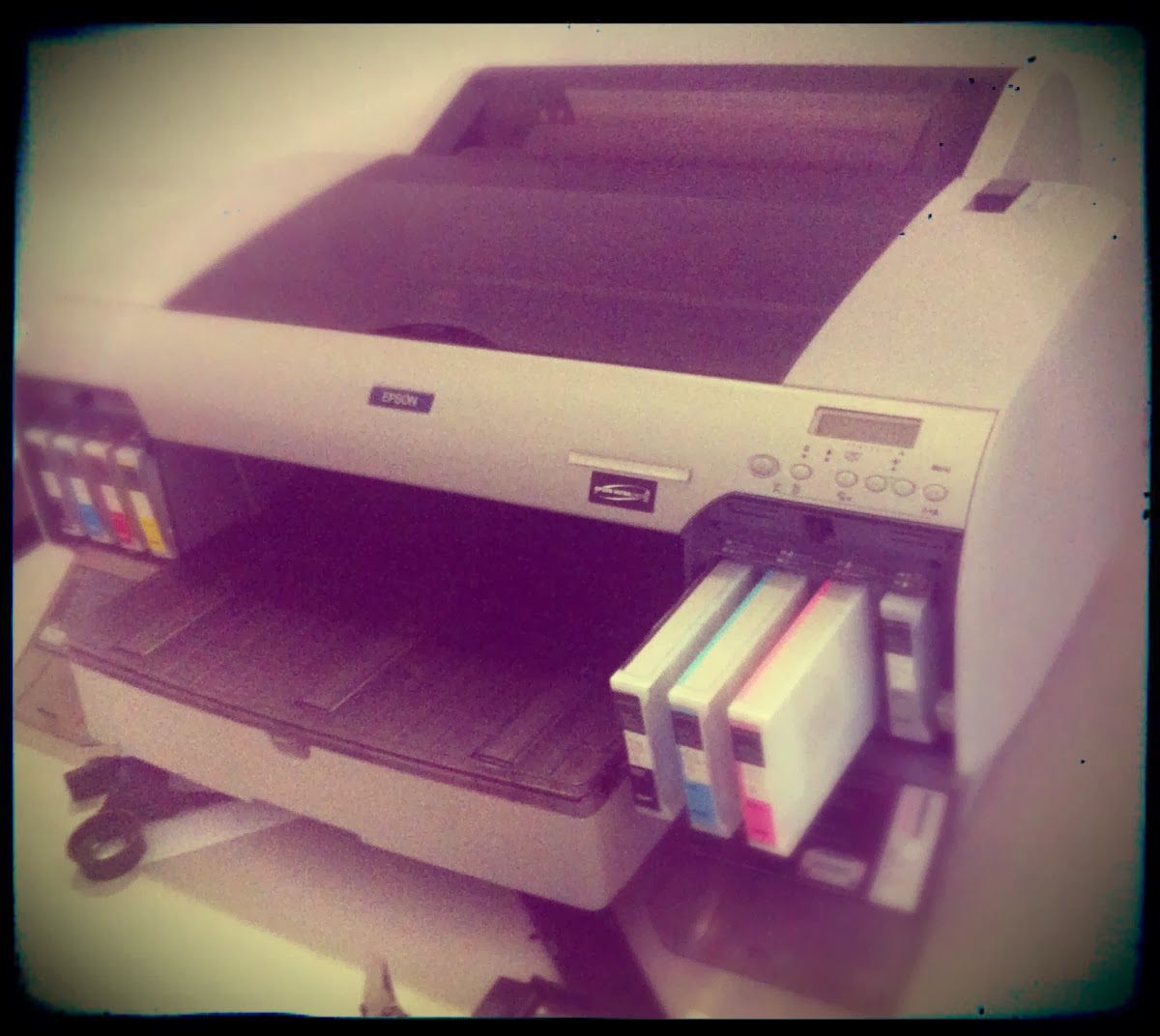 Yeah, turns out I didn't have to look much further to find some peace-of-mind on my printing options (I do have to walk up a flight of stairs though...). Were we talking about color? Just count those cartridges…

But than, since we're starting to think outside the box, hell: 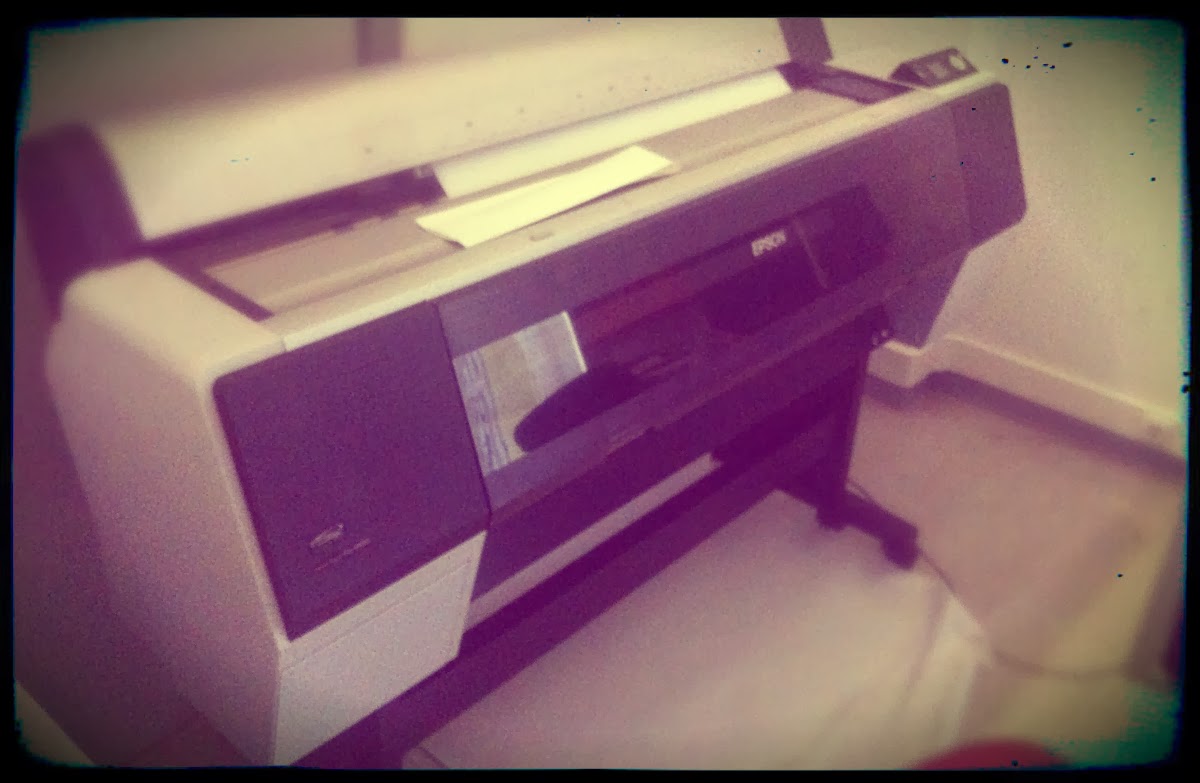 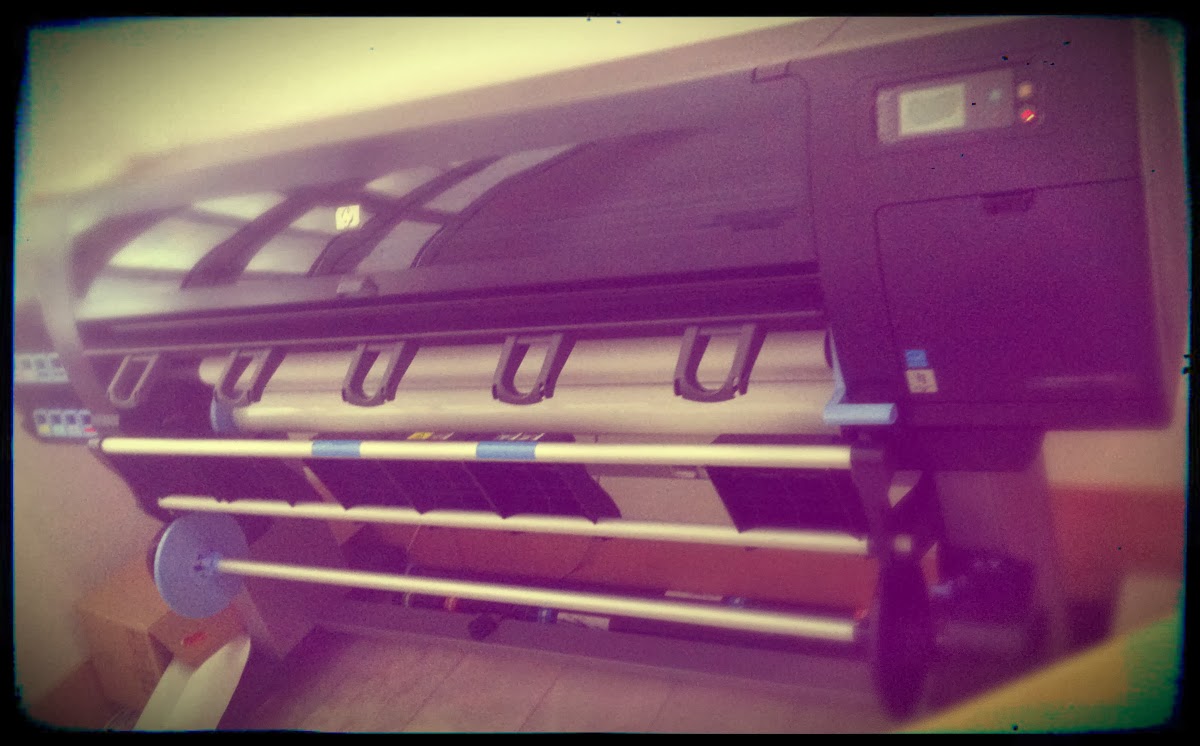 Yeaaaaah…. But it gets better. Really. If you know my zines, you know I like them thick as a brick. If I were to print my stuff on this beast I'll have to go broadsheet or spend entire weekends just cutting them down to my scale, and I hate that shit. While I was thinking about the hows and whens of this course of events, I couldn't help to notice — actually, impossible not to see it, I just used that expression for dramatic purposes — that there's this funny looking printer right beside the previous one: 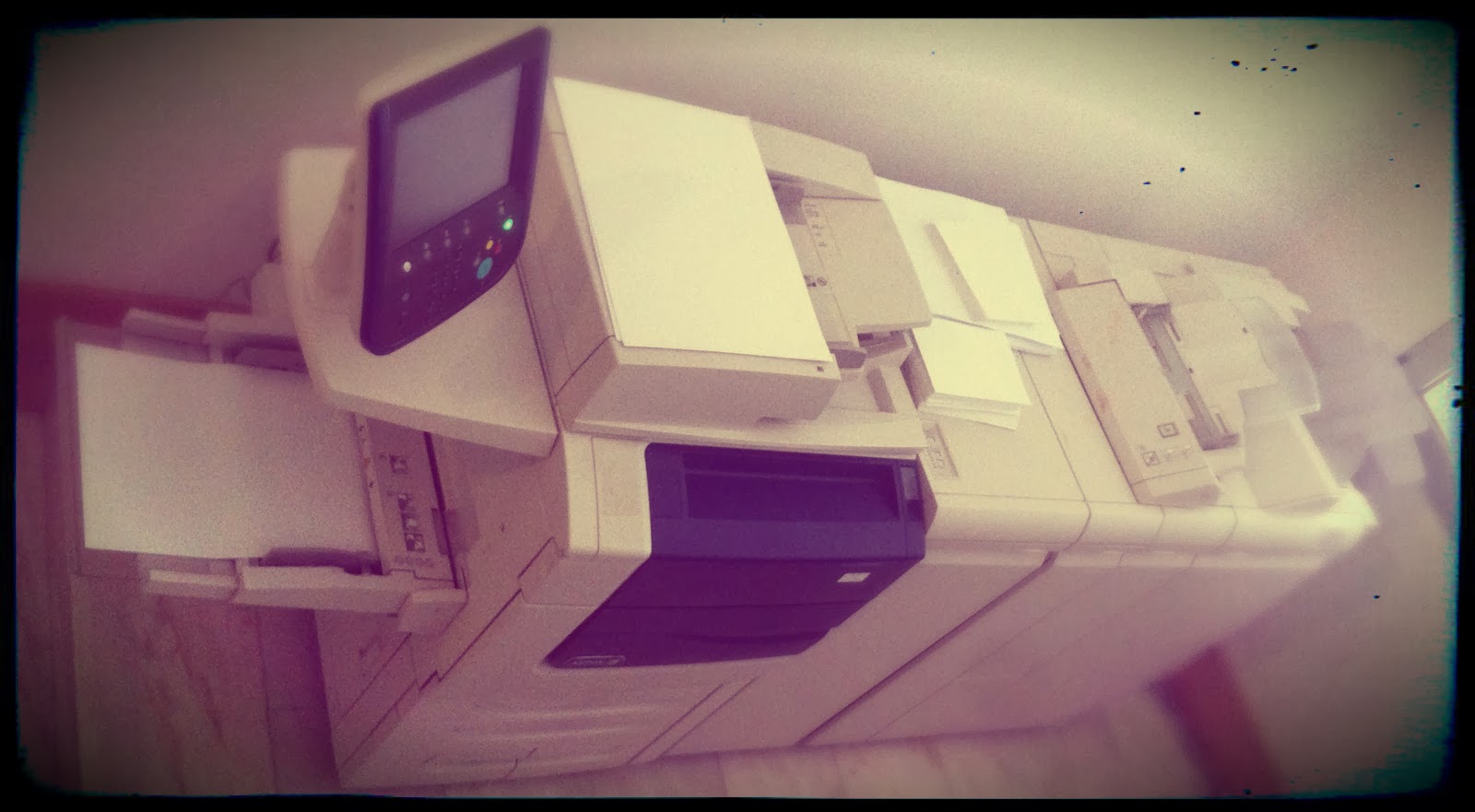 *) "Yep! Can you imagine if it didn't? What if you had to print a few hundred booklets on it, are you going to get some guy to assemble them by hand? Can you imagine?" "Nooo, nope, no I can't, yeah, that would be stuuuuupid."

Now, I know what some less fortunate zinesters out there must be thinking…:

Yeah, maybe one day I'll even miss going old school and all… There's a lot to say about the appeal of zines, and a big part of it also comes down to its manufacturing process. Heck: I work with tech but I'm fed up by it. I work with digital but I luv paper. Life is not black and white. Right now I'm much more into industrial mass communications for a really real small group of selected people, but who knows, maybe some day I'll go all artsy and shit, and create exclusive, unique, individual pieces of work for the masses. Hey, I like to keep my options, and there are plenty of new doors to cross: 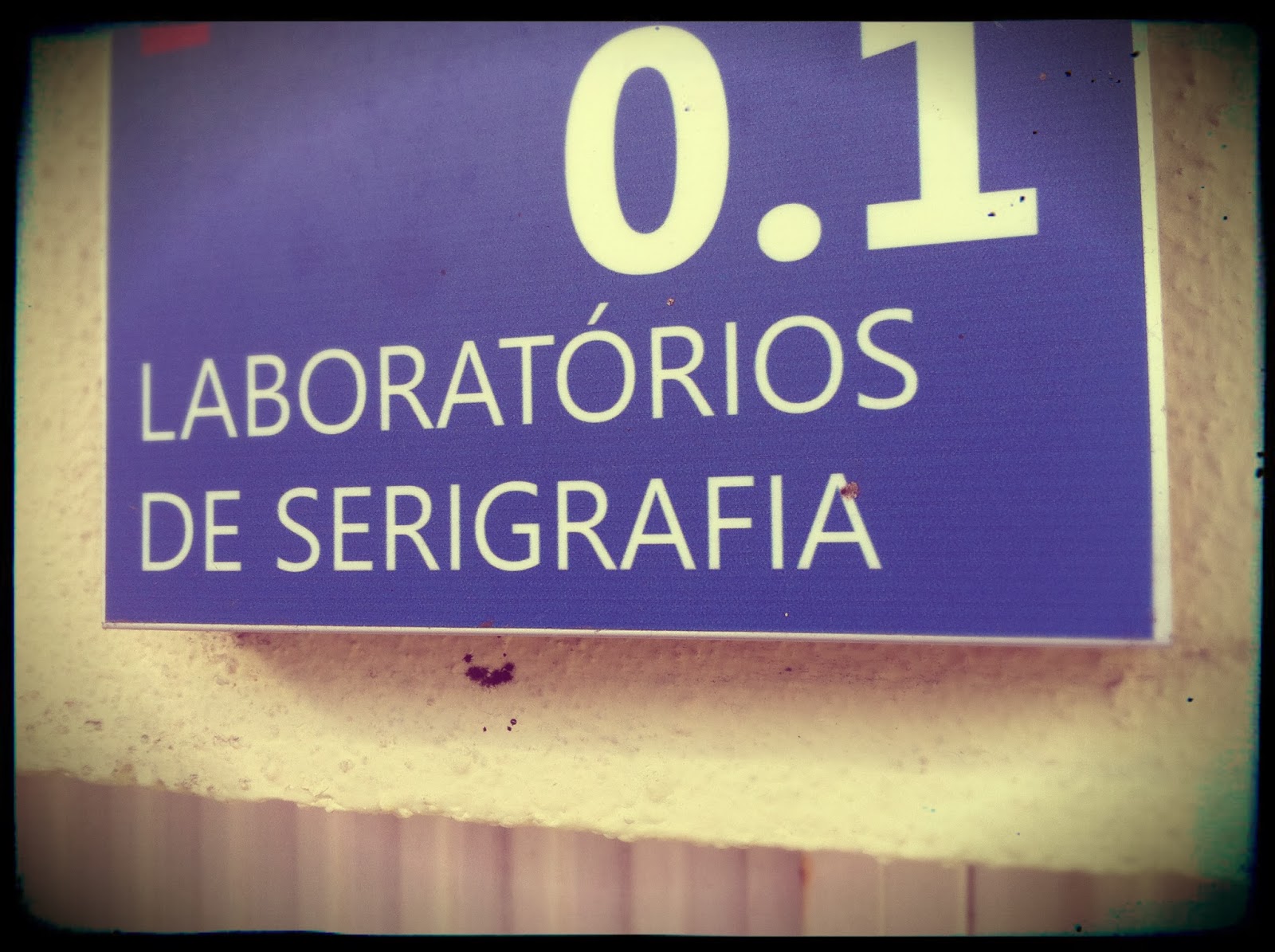 Nah, fuck that. One push of a button and five seconds later a zine comes out all warm, paged and folded? Artsy can go fuck itself.