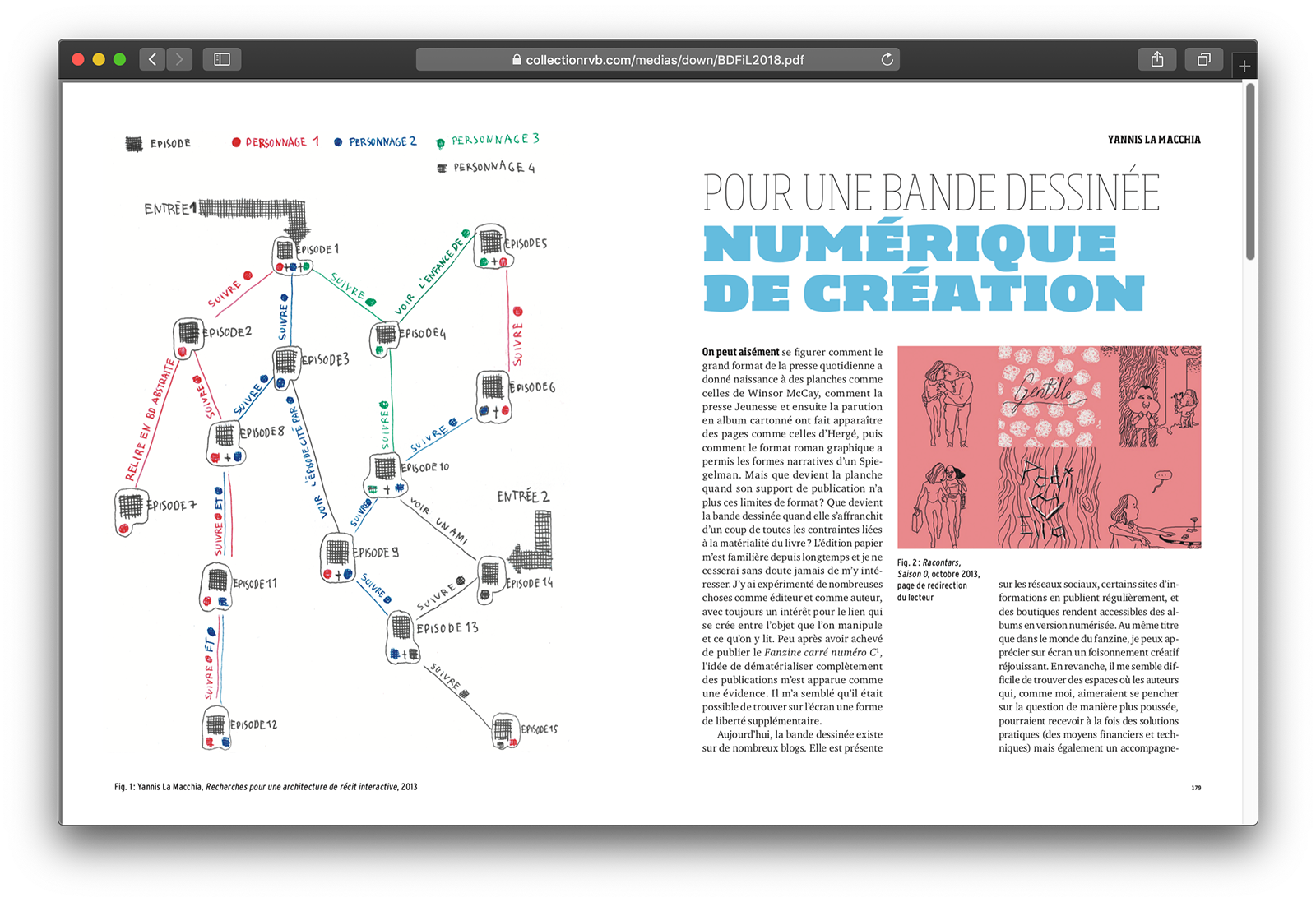 We can easily imagine how the large format of the daily press gave birth to boards like those of Winsor McCay, how the Youth Press and then the publication in hardback album showed pages like those of Hergé, then how the format graphic novel allowed the narrative forms of a Spiegelman. But what happens to the board when its publication medium no longer has these format limits? What happens to the comic strip when it frees itself at once from all the constraints related to the materiality of the book? The paper edition has been familiar to me for a long time, and I will never stop worrying about it. I have experienced many things as a publisher and author, always with an interest in the link that is created between the object that we manipulate and what we read. Shortly after completing the publication of the C 1 Fanzine, the idea of ​​completely dematerializing publications seemed obvious to me. It seemed to me that it was possible to find on the screen an additional form of freedom. Today, comics exist on many blogs. It is featured on social networks, some news sites publish regularly, and shops make accessible scanned albums. In the same way as in the world of the fanzine, I can appraise on screen a plentiful artistic proliferation. On the other hand, it seems to me difficult to find spaces where the authors who, like me, would like to study the question in a more detailed way, could receive at the same time practical solutions (financial and technical means) but also support in the creative process and a space for exchange and collective research. In digital comics, it seems to me that there is a lack of conscientious publishing approaches. By setting up the RGB Collection dedicated to digital comics, I tried to create with the means at my disposal this space in which the publication on screen would be treated with the same seriousness and the same respect as the publication on paper. I hope that my initiative will quickly inspire others, because it is obvious that I will have neither the means nor the time to answer alone the many questions and the many desires that this initiative has given birth to me and to some others. It is with the aim of sharing different reflections that appeared before and during the development of this digital comic collection, that I gathered here a series of various considerations around the support. While taking care to keep as much as possible the desire for freedom that is at the origin of my interest in reading on screen, I would like to ask some re-fathers, even temporary, in the vast field of possibilities that opens up to we. The algorithms and the vast multimedia potential of the screen compel us, in my opinion, to know exactly what we want to find there, on pain of venturing into many different tracks without being able to learn any of them. For me, as free, poetic and inventive as it may be, the comic remains above all a device intended to be read. So it is obviously from the angle of its reading that I want to think of its use on screen. Therefore, it is a question of repose the questions: what is the question of the reading and what determines the comic strip?

Reading is an activity during which time is chosen by the reader. If images or text scroll without having nothing to do, do not we find ourselves in a different position, which perhaps evokes that of the viewer?

In the fairly common cases of the use of a gallery of images, by making successive drawings almost identical in which a single element changes, we obtain a form of jerky animation. This is the method that made the beautiful days of Turbomedia 2. But this process considerably reduces the mechanism of the ellipse. It is replaced by a sort of flipbook effect relegating to the background the need to appeal to our imagination to reconstruct actions between sequences. If the formula can be interesting in some places, does its systematic use not lead to a form of impoverishment of the medium?

Probably imagining that the absence of books in this way has been overcome, some reading platforms have put in place various visual effects (animation of a page that turns, paper effect, etc.) and some gadgets. echnological devices are probably deployed to make easy the reading of boards clearly planned to appear in a book. As far as I am concerned, these effects tend to remind me of the absence of the object they are trying to replace. When the reading interface tries to ape the book or does not assume its specificities, it uses over-perfected devices. If the work is really intended for the screen, it is better to consider the qualities of the medium rather than to restore the illusion of what it is not. In the same vein, the use of the term "digital book" seems to me to be outweighed in that it also puts a strangely emphasis on what is manifestly not there (a book) rather than on the qualities of what is actually before us 3.

Moving back and forth in a text often happens in a book. But the thickness of the work or the length of the text block indicates to us in perpetuity the quantity that remains to be read. Does not knowing where one is in one's reading is essential to our comfort?

In a comic strip, the board can be screen-sized, stretch vertically, horizontally or both ways, and almost at the end. In addition, the format can potentially change on each page. What does a built work look like after having freed itself from spatial limits? The explosion of the format puts the board at the center of the creative possibilities and it seems to me that there is a considerable contribution to inventiveness.

Perhaps less central but certainly not trivial, the use of the monitor involves the use of the color format RGB 5, since it is on the basis of these three colored lights that all those who are display on a screen. In addition to CMYK 6, it adds a large number of new hues, including the comic strip, which is very naturally little used and whose appearance suggests a potential aesthetic upheaval.

When I talk about comics containing hypertext links and integrating a part of navigation, I can almost systematically expect to hear in return a reference to the game books. These albums of our childhood which each sequence ended with a choice of the type: "If you want to attack with an ax, go to page 23, if you want to run, go to page 12." The reference is not necessarily unpleasant, but the idea of ​​the link in a text does not always refer to the game. In most respects, the classical use of the book already includes a form of navigation and forms of non-linear reading 7 when we are, for example, on a news site, we use many links to go from one article to another without this practice evoking the feeling of the game. Similarly, the use of links in an on-screen comic can simply entail a form of navigation between portions of content. Ultimately, it is obviously the way in which the author uses these links which will define if his work is more of the reading or the game. In a writing intended for the screen this practice of the "jump" in the text is simply rendered easier. It therefore becomes completely possible for the author to enamel his text many jumps, if he thinks that his work will be improved. The use of hypertext opens the door to a form of writing by digressions. This option certainly distances us from the classical dramaturgy of the story. It leads to an approach to narrative construction in which the story or subject is brought by a succession of portions whose order can be more or less variable8. In this case the author defines an architecture of his thought or his purpose, then imagine the links between the sequences of his story, to suggest the reader to move freely.

As a publisher, talking about reading without addressing issues related to dissemination and promotion seems unlikely to me. On the internet, there is a profusion of very creative works scattered in various places. Some of them have found an audience and have been widely circulated on the web. But the paradox of the networks remains their propensity to drown under the flow all that does not reignite continually the flame of the partitions, all which does not remain permanently in the actuality. Faced with this mechanism of ef-faction by accumulation and accelerated forgetting, how can works last? How a work a little delicate, can be a little more subtle, a little deeper than another can only exist in such a configuration? If we want to create something reliable and durable on screen, we need at some point to ask us how to get around the flow logic, how to get rid of the network to build something less volatile. In the interests of the authors as well as of the readers, an accompaniment and orientation work should be done. For all these reasons, I think it is important to work with booksellers, librarians, the press and all that traditionally constitutes the book chain and where the main advocates of reading are ultimately located. pretending to constitute an exhaustive list, these few milestones enlighten us on many possibilities as well as on certain gaps. Among these is the lack of attention from those who usually advocate reading, as well as the absence of a sustainable editorial policy that combines author support and linkage with the book chain. I think that the support of the screen would gain from being given a minimum of consideration. Without forgetting what comics is, where it comes from, how it can evolve, showing a minimum insightful and obstinate, showing intellectual and artistic honesty, I have no doubt that it is possible to propose ambitious digital works. The commitment of authors, theorists, booksellers and other actors in the comic strip world who are interested in the subject today suggests a development in this direction. And I'm convinced that those who read their screen, between two browser window, a board here and there an episode, interspersed with flashing notifications, in the hubbub of newsfeeds, as one’s would indulge in a guilty pleasure, will appreciate this initiative. It is ultimately to defend the creativity and quality of reading, without a priori, on all media.

1. A massive object whose presence constantly reminds the reader, this cubic book of 9 x 9 x 9 cm, drawn to 999 copies, for which I invited 90 authors to realize each 9 pages was the third installment of the series of square fanzines.

2. Theorized in the 2000s, Turbomedia has become a fairly common way of using a picture gallery with <and> buttons. Basically, it consists of displaying on a basic image, at each click, new elements such as bubbles, characters, or boxes.

3. And it is not trivial to observe that under this qualificative denying both what a book is a screen, it sells, as a rule, simply a form of diminished comic: books that nothing predisposed to be digitized.

4. Which itself will vary from one reader to another.

7. Footnotes, or endnotes, are the most obvious examples of navigation and non-linearity in a book, but one can also reconcile with the summaries or tabs of a catalog that refer to chapters or sections.

8. The first publications of the RGB Collection, those of Oriane Lassus, Antoine Fischer and Buster Yañez, work clearly on this model.