The web is for everyone. Not just for everyone to use. It’s for everyone to build. This is about all those people who could potentially become makers of the web. We should be welcoming them, not creating barriers for them to overcome.
in "Ends and means" 26 fev 2018

Comic Book Markup Language, or CBML, is an XML vocabulary for encoding multiform documents that are variously called comics, comic books, and “graphic novels” as well as other documents that integrate comics content or that share formal features with comics content.
in "What is CBML?" s/d

Markup is inserted into textual material not at random, but to convey some meaning.

A markup language is a set of machine-readable textual codes, or "tags," that are used to identify structure, semantics, and other features of documents and data. The application of these codes to a document is typically a necessary stage, often the most crucial and informative stage, of editing, analyzing, indexing publishing, visualizing, and otherwise studying or manipulating texts in digital environments. The act of encoding a document is a form of discovery, or prospecting, in which the encoder maps a document's structure, identifies semantic elements of interest, and documents relationships internal and external to the document.
in "Comic Book Markup Language: An Introduction and Rationale" 2012

The migration of comics content to digital reading devices, and the structural and aesthetic implications of that migration, call attention to the impact of the material characteristics of the comic book document.

The structural, textual, visual, and bibliographic complexity of comic books make them an excellent subject for the general study of complex documents, especially documents combining pictorial and textual elements.

Comic books are exceptionally complex documents, with intricate relationships between pictorial and textual elements and a wide variety of content types within a single comic book publication. The complexity of these documents, their combination of textual and pictorial elements, and the collaborative nature of their production shares much in common with other complex documents studied by humanists — illuminated manuscripts, artists’ books, illustrated poems, letterpress productions, illustrated children’s books, and even Web pages and other born-digital media.
in "Comic Book Markup Language: An Introduction and Rationale" 2012

In light of the ongoing cultural and scholarly relevance of comics, one goal of CBML is to support the study and analysis of comic books — even Web pages and other born-digital media. CBML is intended primarily for representing, modeling, and analyzing twentieth- and twenty-first-century comic books, daily comic strips, longer narratives or "graphic novels," and Web comics and other comics content published on digital platforms, such as smartphones and tablets.

The emphasis on both "comics" and "books" in the title of the language signals an awareness of the full range of content in the material artifact and the integration of comics content with related paratextual content. The material properties of the book — the codex form, the leaves and pages, the physical properties of the paper — are inseparable from the structure, pacing, and design of the narrative.

Comic books are often very formally self-conscious documents and express a fascination with their own bibliographic identities — creators (comic book writers and artists) become characters in the narrative, editorial notes refer to episodes from prior issues, comic books and paratextual elements, such as advertisements, are parodied within the comic book narrative, publication milestones (such as the first, fiftieth, or one hundredth issue are highlighted and celebrated. These literary, rhetorical, and commercial moves point to a self-awareness of the comic book as document and bibliographic object.
in "Comic Book Markup Language: An Introduction and Rationale" 2012 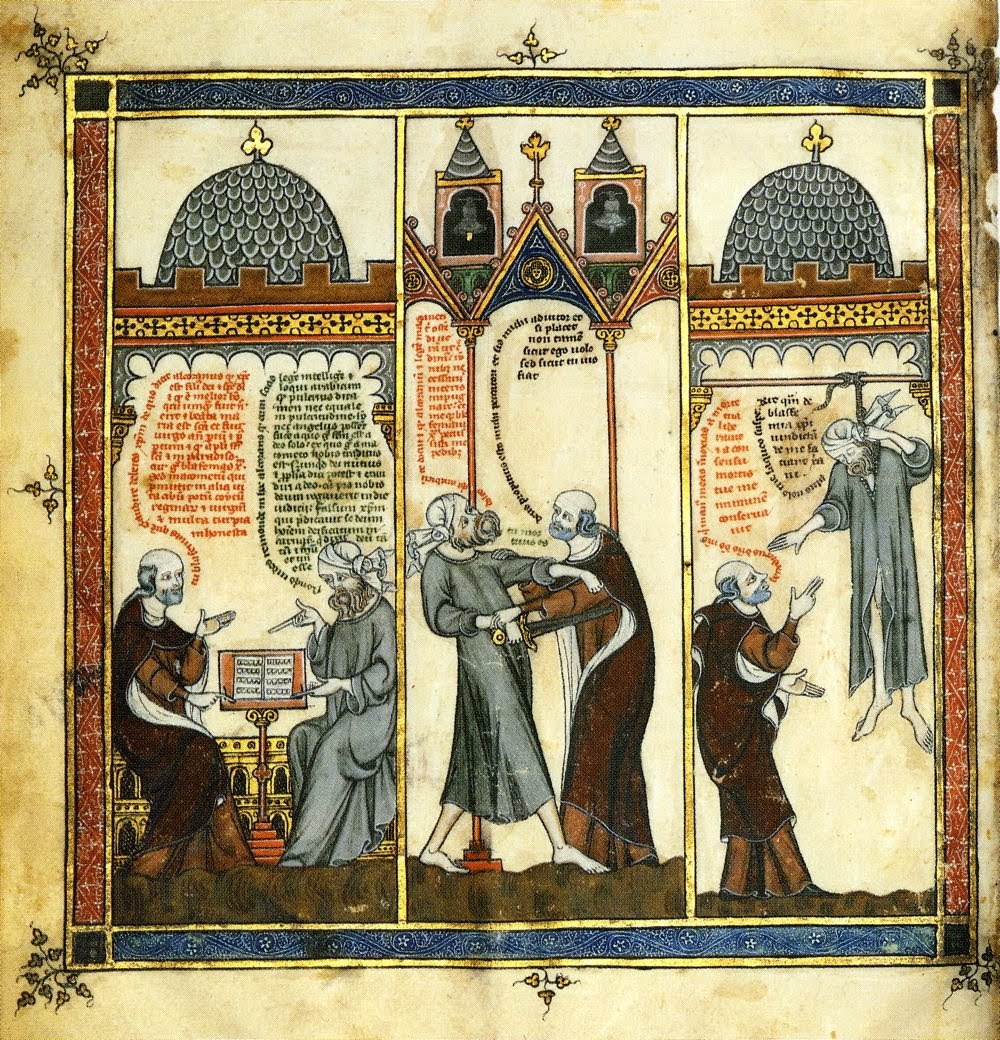 "Electorum parvum seu Breviculum"
The isolation of a panel from its surrounding context is not easily achieved in print media.

iPhones and other smartphones have become popular devices for reading newly published comics as well as "reprints" of older comics. However, a full-page grid of panels is not easily readable on the smaller screen of the typical smartphone, so the software interfaces on such devices focus on a single panel at a time. The deliberate juxtaposition of graphic and textual elements in the original composition is shattered by the interface requirements and limitations of the reading device. As new comics work is increasingly targeted at such digital platforms, the traditional grouping of panels into compositional units resembling pages may be abandoned for new compositional strategies.
in "Comic Book Markup Language: An Introduction and Rationale" 2012

A large corpus of digitized comic books, along with encoded transcriptions and descriptive metadata, would allow scholars to search the text of comic books, search for keywords related to topics of interest, search for the appearance of particular characters, or search for works by particular writers and artists. Additionally, when exploited to its full potential, a large CBML collection would allow searching — and other forms of computer processing and computational analysis — based on structural, aesthetic, and informational and documentary features peculiar to the genre of comic books. This sort of functionality has proven incredibly useful and has transformed the ways in which scholars and students conduct research and "read."

Individual comic books and graphic narratives may be better understood through strategies of close reading, with careful attention paid to minute details of linguistic and visual language and document features, but comic books as a system and extended comic book narratives — which often unfold over decades in thousands or tens of thousands of individual documents by hundreds of creators (writers and artists) - benefit also from the distant reading (of text, image, and metadata) from comic book documents.
in "Comic Book Markup Language: An Introduction and Rationale" 2012

By "comics" content, I refer to the sequential art — usually combined with text — of the comics narrative.
in "Comic Book Markup Language: An Introduction and Rationale" 2012