[OLB] I ask Katchor whether he would still pursue a career in comics, were he a college student today.
[BK] If I were starting out now, I'd be a completely different person, having grown up in a completely different world, been exposed to different technology, different art and animation ... things that weren't possible when I actually did grow up. But you know, knowing what I know about the world we live in, about the environmental harm we've caused to the planet, I would probably have dropped out of school and devoted my time to blowing up oil pipelines. Yes, that's something I probably would have done.
in "'I Feel Like We're Replaying World War I': A Conversation With Ben Katchor" 5 fev 2017

An associate professor of Illustration [...] his illustrations moved into higher-paying legacy publications like The New Yorker, and his first full-length graphic novel was published by Pantheon.
in "'I Feel Like We're Replaying World War I': A Conversation With Ben Katchor" 5 fev 2017

Ben Katchor made history by becoming the first cartoonist to win a MacArthur Fellowship. By that point, he had already won various prestigious awards, like a Guggenheim Fellowship, and had been the subject of profiles by writers such as Lawrence Weschler and John Crowley. His work would continue to appear in highbrow magazines and get reprinted in book form by major publishers.
in "'I Feel Like We're Replaying World War I': A Conversation With Ben Katchor" 5 fev 2017

The cover of The Best American Comics 2017, drawn by Matthew Thurber, is itself a political provocation of the highest order: a stylized reproduction of the well-known cover art for George Orwell's novel 1984 that is political in a way that the previous five covers - each aesthetically evocative but context-free - were not.
in "'I Feel Like We're Replaying World War I': A Conversation With Ben Katchor" 5 fev 2017

I found something comforting about Katchor's lumpy-bodied characters and their running commentary on the ephemera of a surreal, ever-evolving urban landscape. As a budding historian, I was captivated by this powerful evocation of an imaginary past. Neither the portrait of a political radical.
in "'I Feel Like We're Replaying World War I': A Conversation With Ben Katchor" 5 fev 2017

Julius Knipl, the character I drew in many of those comic strips, was an observer who never got involved, who merely commented on what he saw. Leftist politics was the home base, and I always looked at this world as something to be critiqued - I wound up offering this critique as a cartoonist, not as an analyst or politician.
in "'I Feel Like We're Replaying World War I': A Conversation With Ben Katchor" 5 fev 2017

This is a crazy time, a mental age. You look at our politics and ... well - It's obviously a business, a racket, and it's controlled entirely by businessmen. How can you fail to address that in your art, even if only obliquely?

Katchor's bitterly humorous introductory text, which skewers the pretensions of himself and other comic artists in this era of increasing economic precarity, catalogues the impulses that might compel a "cartoonist to toil in obscurity, and with little remuneration over decades, often through the prime years of their life".
in "'I Feel Like We're Replaying World War I': A Conversation With Ben Katchor" 5 fev 2017 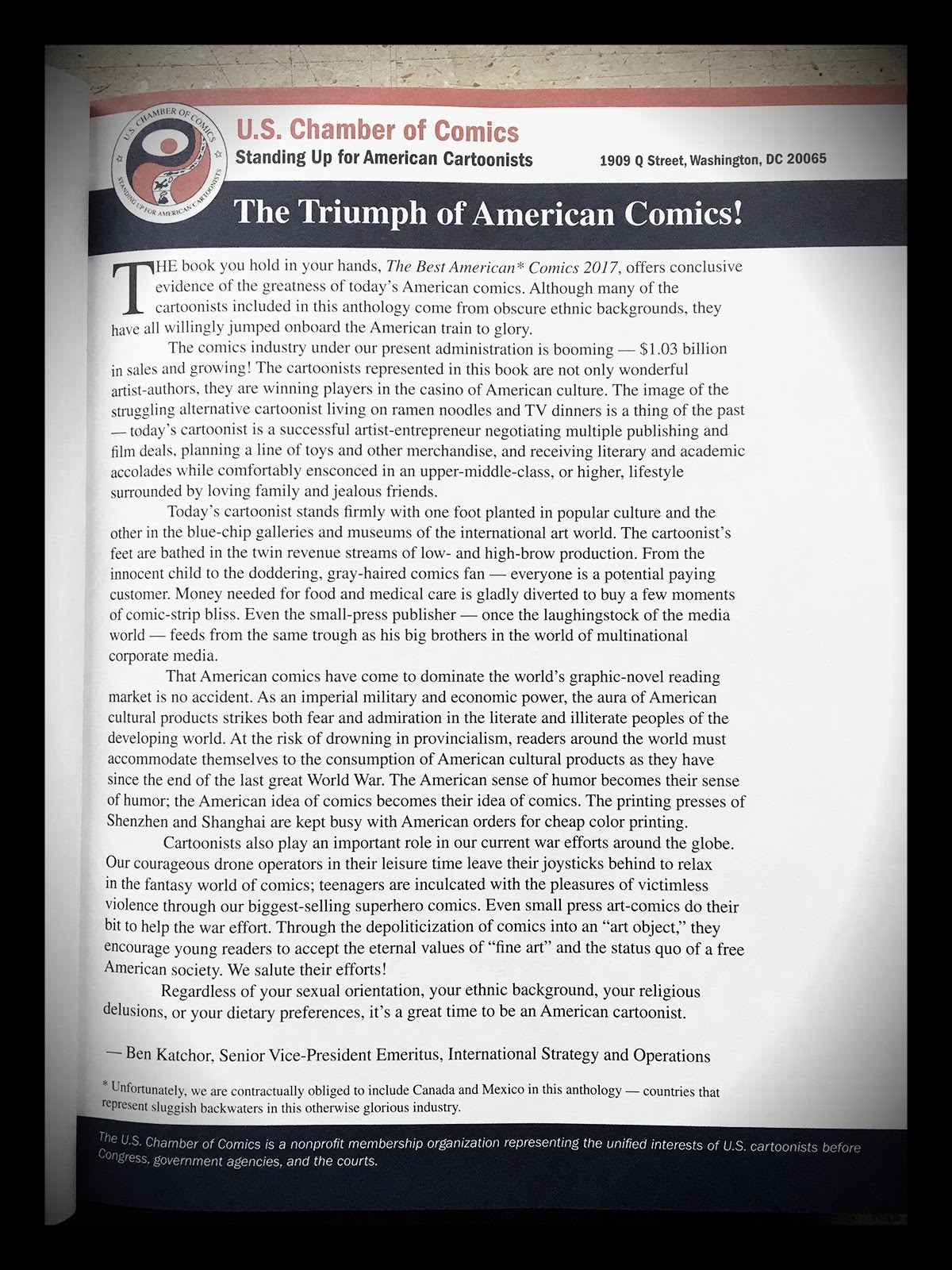 THE book you hold in your hands, The Best American Comics 2017, offers conclusive evidence of the greatness of today's American comics. Although many of the cartoonists included in this anthology come from obscure ethnic backgrounds, they have all willingly jumped onboard the American train to glory. The comics industry under our present administration is booming — $1.03 billion in sales and growing! The cartoonists represented in this book are not only wonderful artist-authors, they are winning players in the casino of American culture. The image of the struggling alternative cartoonist living on ramen noodles and TV dinners is a thing of the past — today's cartoonist is a successful artist-entrepreneur negotiating multiple publishing and film deals, planning a line of toys and other merchandise, and receiving literary and academic accolades while comfortably ensconced in an upper-middle-class, or higher, lifestyle surrounded by loving family and jealous friends. Today's cartoonist stands firmly with one foot planted in popular culture and the other in the blue-chip galleries and museums of the international art world. The cartoonist's feet are bathed in the twin revenue streams of low- and high-brow production. From the innocent child to the doddering, gray-haired comics fan — everyone is a potential paying customer. Money needed for food and medical care is gladly diverted to buy a few moments of comic-strip bliss. Even the small-press publisher — once the laughingstock of the media world — feeds from the same trough as his big brothers in the world of multinational corporate media. That American comics have come to dominate the world's graphic-novel reading market is no accident. As an imperial military and economic power, the aura of American cultural products strikes both fear and admiration in the literate and illiterate peoples of the developing world. At the risk of drowning in provincialism, readers around the world must accommodate themselves to the consumption of American cultural products as they have since the end of the last great World War. The American sense of humor becomes their sense of humor; the American idea of comics becomes their idea of comics. The printing presses of Shenzhen and Shanghai are kept busy with American orders for cheap color printing. Cartoonists also play an important role in our current war efforts around the globe. Our courageous drone operators in their leisure time leave their joysticks behind to relax in the fantasy world of comics; teenagers are inculcated with the pleasures of victimless violence through our biggest-selling superhero comics. Even small press art-comics do their bit to help the war effort. Through the depoliticization of comics into an "art object," they encourage young readers to accept the eternal values of "fine art" and the status quo of a free American society. We salute their efforts! Regardless of your sexual orientation, your ethnic background, your religious delusions, or your dietary preferences, it's a great time to be an American cartoonist. 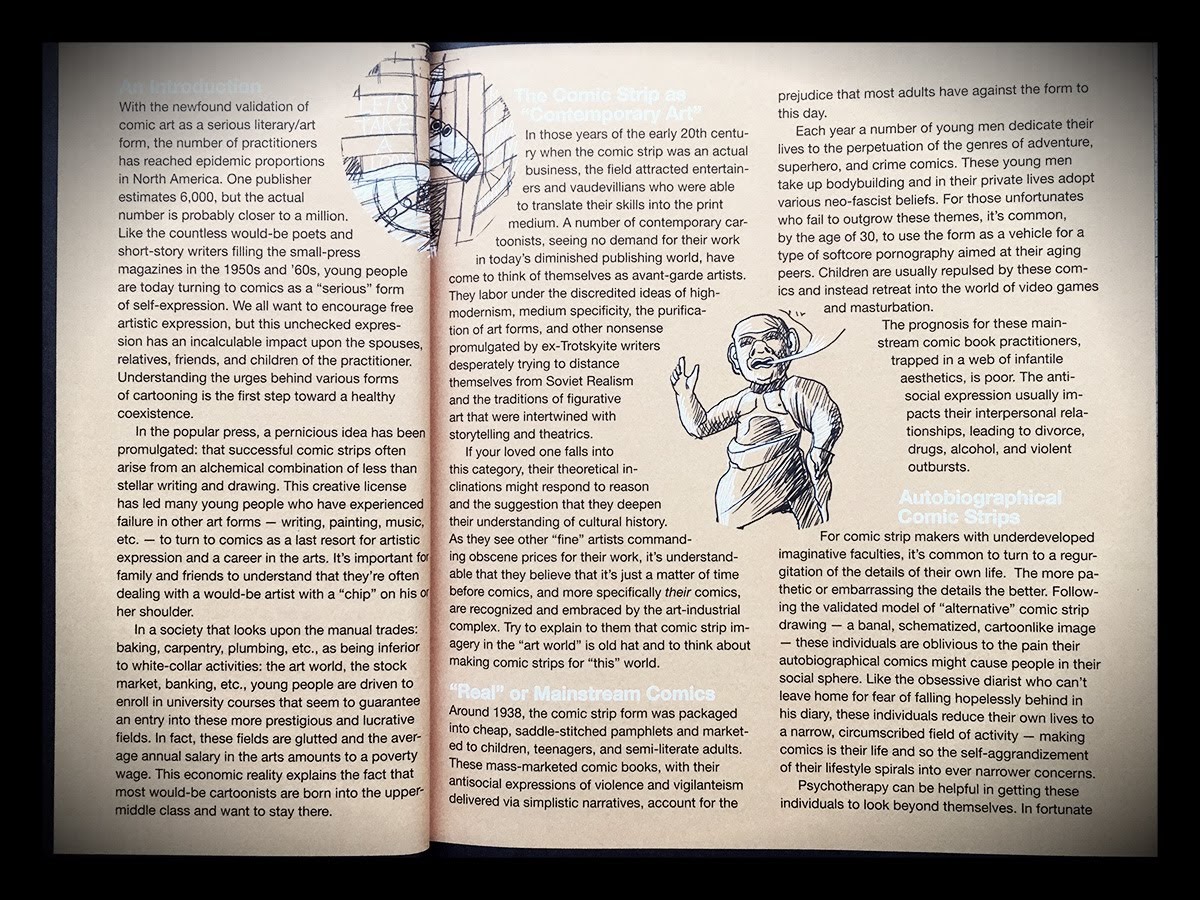 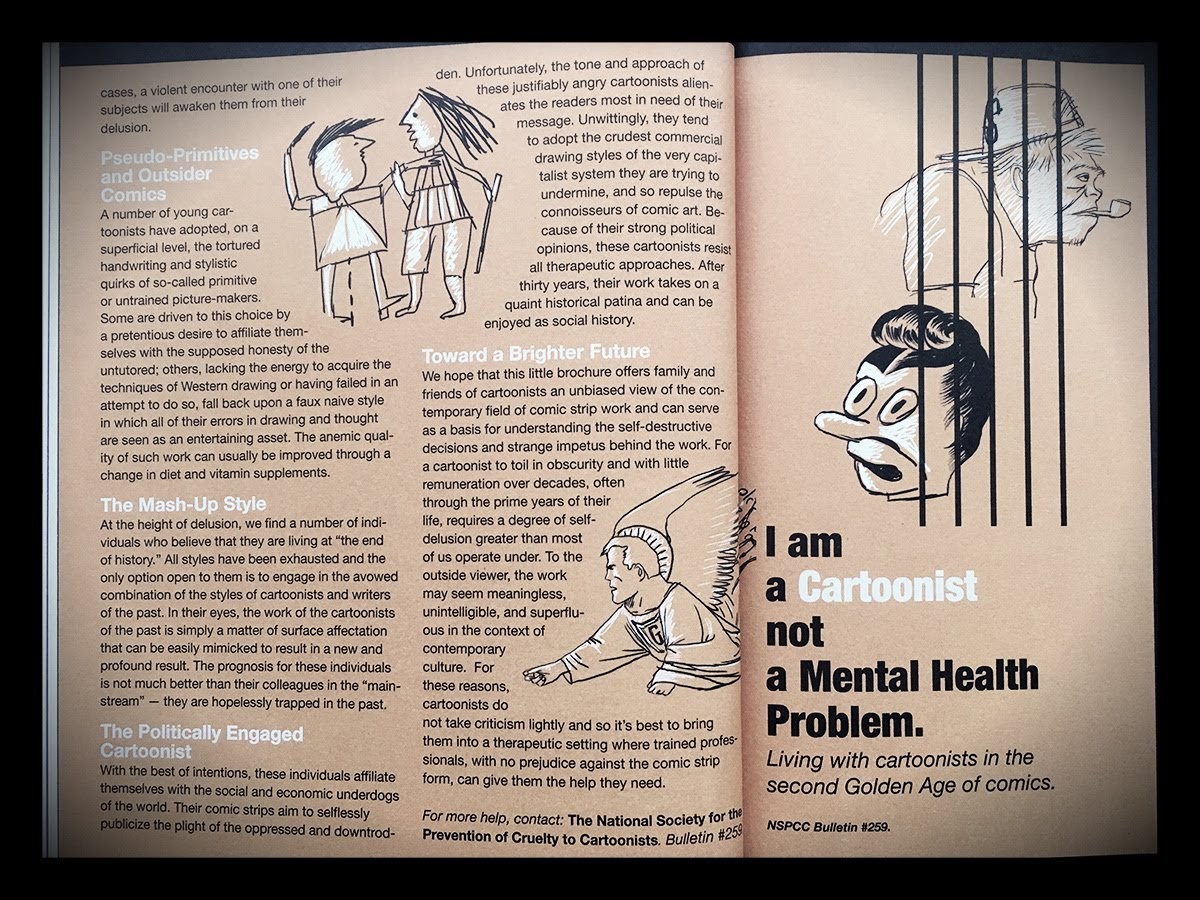 When I was developing my interest in cartoon art, I was enrolled in college studying painting and literature. But I loved this idea of the mass reproduction of artwork that could live on a rack near a candy stand, and I didn't have nearly that same passion for the world of galleries and high modernist art. In the 1970s, it was difficult to publish such things because the literary world, the art world ... the people there were extremely suspicious of comics. We've yet to tackle all the ways that comics production can democratize the image. It's still not quite what I envisioned in my wildest dreams: racks next to candy stands filled with lots of diverse, intellectually compelling comics work, available at cheap, pulp-level prices to anyone seeking good art.
in "'I Feel Like We're Replaying World War I': A Conversation With Ben Katchor" 5 fev 2017

There's been an explosion of work done in this form, a broader sense of what it can be used to accomplish, unlike the superheated market for so-called 'serious' art, and here you have all these talented creators trying to solve the problem of the comic strip.
in "'I Feel Like We're Replaying World War I': A Conversation With Ben Katchor" 5 fev 2017 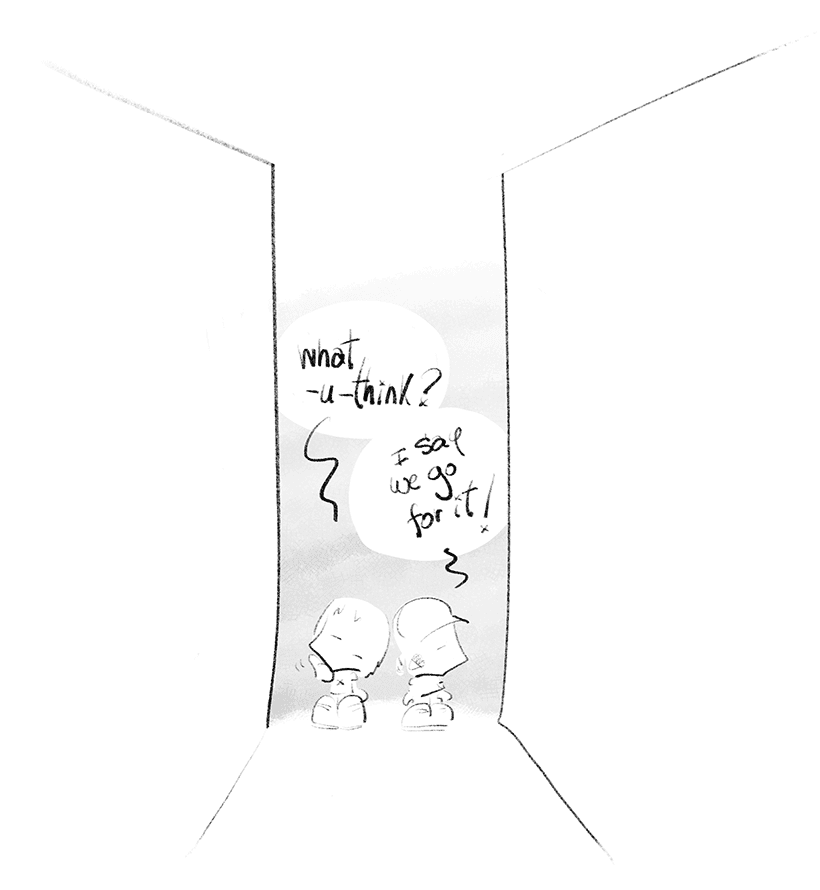 they went for it!