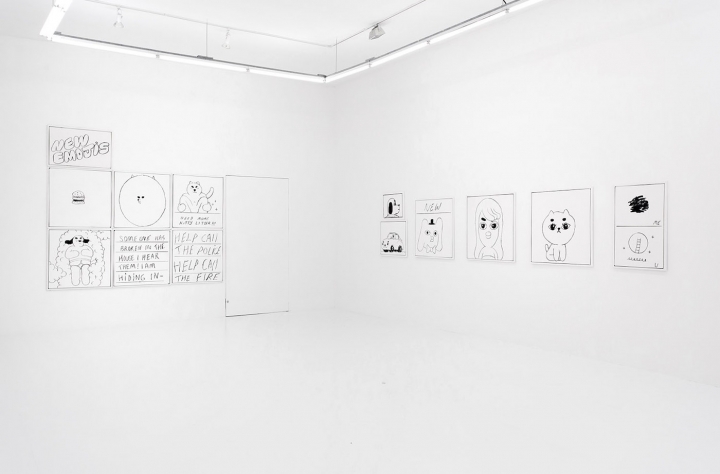 I was always kind of aware of that, but was never literally aware of that, so now I’m hyperaware of that, and I feel like I’m making better design choices.
in "Lines of Thought: An Interview with Ben Jones" 5 nov 2016

Ben Jones is a rare breed of artist who isn’t content to work in one or two mediums; describing his output requires list-making: comics, digital art, zines, drawings, paintings, sculpture, video, prints, animation, design, music, as well as work that combines two or more of these to produce a third genre, such as video paintings.
in "Lines of Thought: An Interview with Ben Jones" 5 nov 2016

Thirty comics panels painted on thirty white canvases are gathered into several discrete groups. On its face, the work looks retrograde; but, as Jones was quick to explain, line drawing has been a vital element of his art from the very beginning.
in "Lines of Thought: An Interview with Ben Jones" 5 nov 2016

Using the comics as source material, I was able to fully play off the idea that they’re both real comics and aren’t real comics.
As a painter, I’m constantly chasing that magical, ethereal line or stroke or gesture that is half muscle memory or trance action.

Nicole Rudick: Are these paintings of new comics?

Ben Jones: I want to give you the two narratives. There’s the concept of the show, which is hopefully how the audience perceives it and how I approached it creatively — to make a zine first and then to have a meta-art show where I’ve hung the “originals” from the zine. Typically, you’d show the originals in this way at a comic-con or a coffee shop or something like that. I intentionally wanted to present the show in that conceptual context, as a novelty. I took that to the furthest extent by adding the fake red dot you’d see at a coffee-shop art show, to indicate that the work had been bought.

There’s a narrative to a lot of these pieces and a linear way to think about them, but then we also get to think about comics and about the formal aspects of comics, because comics aren’t just linear storytelling and gags. There is a nuanced, visual-language fuckery that I think is important.

NR: Putting comics originals on the wall is a loaded idea: the question of whether work intended for the page should be displayed in that context. But then, even though the art on the walls shows up in the printed zine, the artworks aren’t actually comics originals — they’re paintings. But they’re also not paintings, because they’re comics. They’re neither one nor the other.

BJ: They’re definitely not comics. And while it is oil paint on canvas, they’re not paintings. They’re neither, but they are both, which is so fucked up. It’s such a weird feedback loop. You’d get into a lot of trouble saying they were either one, or neither one.

NR: And each panel, within each “strip,” becomes its own canvas.

BJ: The panelization! I’m sure there’s good writing on this – abstract painting on panels is an absurd thing and I’ve always loved that in a formal way. I could easily have done the paintings on one large canvas, but I loved the exercise of the panelization.

NR: The zine came first, before the paintings? So the zine acts as a kind of prototype?

BJ: Yes, that’s what I learned from animation — to keep everything in a digital state so I can constantly be prototyping.

You can use a spot color, but CMYK color can’t give you a good green.
You’re totally limited, and it’s at the mercy of all these other decisions

Color has typically been just this weird afterthought, and to introduce color into the work in this show would bring up all those issues, because the horrible truth is that cartoonists are stuck with CMYK processed color.

Color is just this whole other mess, and it was always secondary to the line drawing.

You’re at the mercy of the process, whereas what’s so great about the blank page and a pencil and a nib and some ink is you can create Batman, you can create Superman. With the line, you can create anything.
in "Lines of Thought: An Interview with Ben Jones" 5 nov 2016

You have anime being born in Japan [and] underground comix being born in the US. And then the best thing ever happens — Mœbius. Anime starts to look at Mœbius, and Mœbius looks at R. Crumb. Johnny Negron did one drawing where he has R. Crumb, Mœbius, and Miyazaki characters altogether. It’s not talked about enough, that connection. But it’s important. That’s where contemporary animation language comes from — Mœbius, Robert Crumb, Miyazaki. Out of that, obviously, you get Matt Groening, but at the same time Gary Panter is evolving within there. And so you have these secondary people who are further shaping this global or cosmic unconscious art style. Now we’re living at the most enlightened point, where you have Johnny Negron, a kid, seeing these images on Tumblr.
in "Lines of Thought: An Interview with Ben Jones" 5 nov 2016

Tumblr was a platform that sped up kids’ understanding what good art was.

NR: Why do you think we’re at the moment where all of that has become relevant again?

BJ: The Internet has let it happen. Tumblr is a black hole of curation and appropriation and aggregation. It figured out art. It didn’t figure out the stock market or pornography.

NR: Is it good art if you can take something away from it?

BJ: I love that we’re talking about this. It’s good art because being on Tumblr requires active participation, and you have to almost be good at what you’re doing. You can’t go onto Tumblr and promote shit — it won’t get anywhere. It’s like seeing everything the two coolest kids in high school are putting up in their lockers, but instead of just two kids, Tumblr is thousands of those kids. And then those kids are informing each other. So you have all the cool kids helping each other create a beautiful stream of content. The beauty of Tumblr isn’t liking something, but re-blogging it.
in "Lines of Thought: An Interview with Ben Jones" 5 nov 2016

That little sharing tool that made it like trading zines. A good Tumblr post will go viral. A good zine used to go viral. You can pass zines around and they’re easy to duplicate, and re-blogging on Tumblr was like giving someone a zine or an image and they put it in their collection, and two other people see it there and they recontextualize it, reaggregate it.
in "Lines of Thought: An Interview with Ben Jones" 5 nov 2016

Zines were always great at aggregating, and trading images that way was free. The big thing with Paper Radio was that it was free — it’s like radio, it’s like broadcasting ideas for free.
in "Lines of Thought: An Interview with Ben Jones" 5 nov 2016 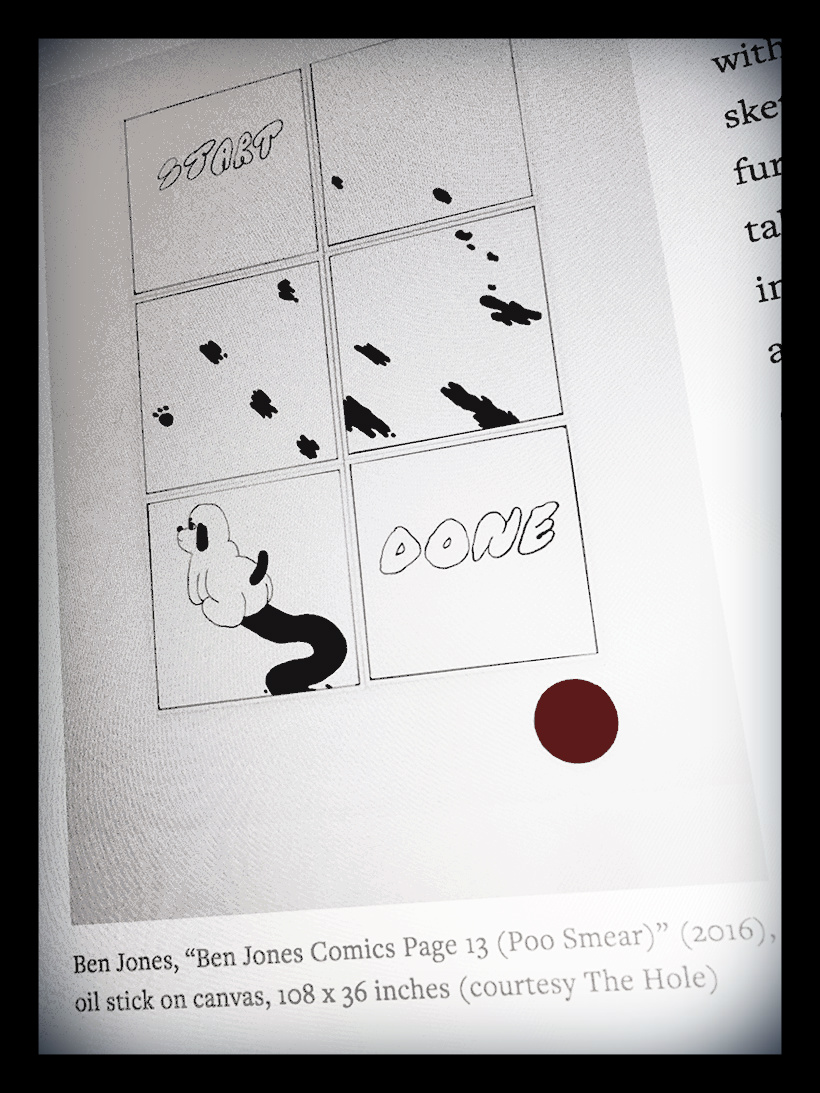