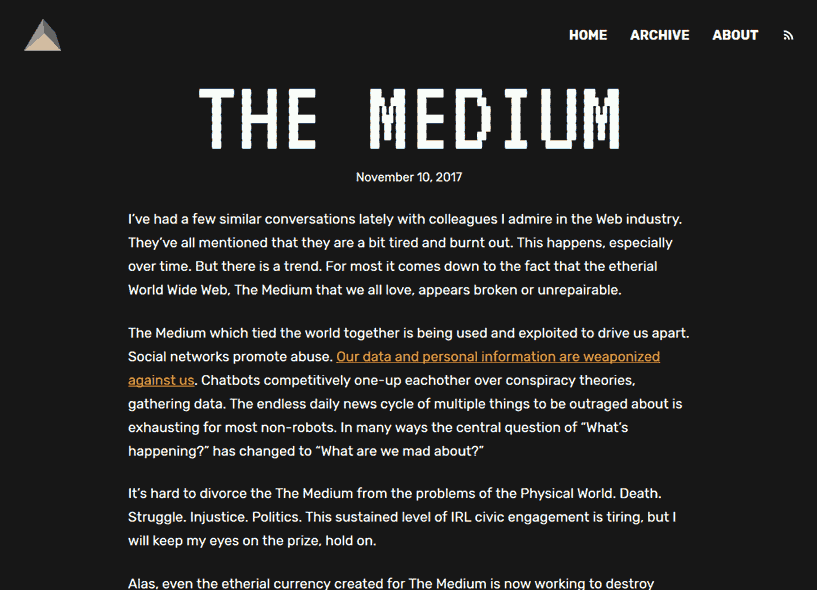 I’ve had a few similar conversations lately with colleagues I admire in the Web industry. They’ve all mentioned that they are a bit tired and burnt out. This happens, especially over time. But there is a trend. For most it comes down to the fact that the etherial World Wide Web, The Medium that we all love, appears broken or unrepairable.

The Medium which tied the world together is being used and exploited to drive us apart. Social networks promote abuse. Our data and personal information are weaponized against us. Chatbots competitively one-up eachother over conspiracy theories, gathering data. The endless daily news cycle of multiple things to be outraged about is exhausting for most non-robots. In many ways the central question of “What’s happening?” has changed to “What are we mad about?”

It’s hard to divorce the The Medium from the problems of the Physical World. Death. Struggle. Injustice. Politics. This sustained level of IRL civic engagement is tiring, but I will keep my eyes on the prize, hold on.

Alas, even the etherial currency created for The Medium is now working to destroy Physical World. One Bitcoin transaction now uses as much energy as your house in a week. If it were me, I’d shut down this experiment. It is immoral.

But that’s part of the problem, isn’t it? We’re building things without regard for the ethical implications. Especially, if ignoring the ethical ramificiations happens to create wealth. “Peak capitalism” I guess it’s called. As we yield control over to artificial intelligence and learned machines, I can only hope their trainers considered more than efficiency and capitalism.

The Medium is slowly being owned by a handful of companies. Reports of the Web’s death are greatly exaggerated, but concentrations of power rarely end up well for the general public.

For the physical pixels and bytes delivered to the glowing screens, I have heard specific concerns as well.

Recently in a talk about design I heard that “UX is a solved problem.” This particular use of “UX” was in the context of GUIs. That’s a bit deflating and hard to rebut. But maybe in some ways this is a relief, in less than 20 years we’ve managed to upload enough wisdom and shared knowledge into The Medium, that problems are no longer problems. Our knowledge can be automated and we can start thinking about bigger problems.

As browsers have gotten better and eliminated age-old problems, the build tools have gotten more complicated. In a recent talk on Source Maps I heard that “JavaScript is a compiled language”, which is to say the output sent to the browser more resembles a binary format than its human readable source. This is true, though not required. For me, I feel the complex toolchain disconnecting me from the instant gratification of publishing to the Web.

Lord, save me from my Ludditism.

I share the disillusionment. This version of The Medium is not The Medium I want or fell in love with. This is a love story about humans connecting across continents. I want to be hopeful even at the risk of being naïve.

I have to keep reminding myself that I do have some control. I can build The Medium I want. I can cling to what’s good. And this gives me hope. 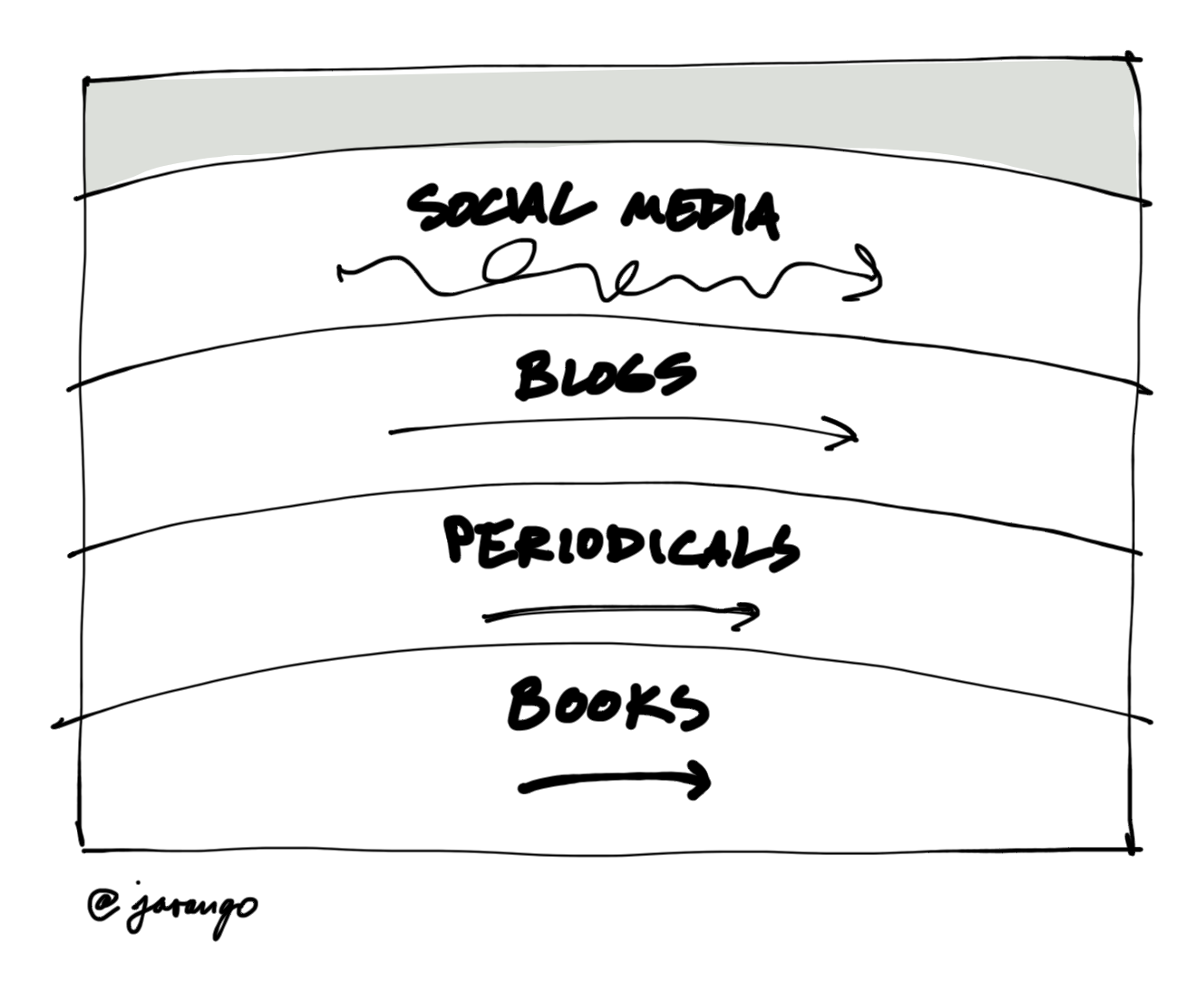 As you go down the stack, the signal-to-noise ratio improves. If you’re looking to build your character, the best texts are the ones at the very bottom. Much of the stuff in the top layers is only good for raising your heart rate.
in "What Are You Reading?" 8 nov 2017

for fun and profit