"what most readers on August 8, 1959, saw when they scanned the comics page that morning"

Webcomics are a nebulous enterprise from an economic standpoint.
in "Your webcomics Isn't a Good Book" 27 nov 2017

The first volume of M.F.K. feels like I’ve seen 20 minutes of a 2.5 hour movie, and I’ve been forced to leave the theater.

The book itself is a $25 hardcover with large page format, full color, 128 pages, and covers the first 3 chapters of the webcomics. But it’s clear that Magruder is in for the long-haul with this comic — the first three chapters are the bare bones introduction to the world and the characters she is building. That makes a single collected volume feel… underwhelming, to be polite.

The pacing is glacial, the action is slow to kick off, it just doesn’t go anywhere. If you’re reading this to be entertained, my guess is that you’re going to be disappointed. Bluntly, M.F.K. isn’t built to read the way a book like this is supposed to read, and suffers for it.
in "Your webcomics Isn't a Good Book" 27 nov 2017

I think it’s important to think about the scope and pacing of the work. As a print object, does every page of the webcomics need to be collected? Can the work be edited, pages added or subtracted, to make a more convincing whole? The needs of a webcomics, which may be published page-by-page, 1-2 times a week, are much different than the needs of a book.

Part of the way webcomics work is the anticipation for the next page – but in a collected edition, that page is just a flip away, not a week away. The immediacy of the change in action, the immediacy of the page turn makes demands on the cartoonist that webcomics doesn’t.
in "Your webcomics Isn't a Good Book" 27 nov 2017

Ultimately this is an editorial problem.
in "Your webcomics Isn't a Good Book" 27 nov 2017

"How to Read Nancy" ingeniously isolates the separate building blocks of the language of comics through the deconstruction of a single strip. No other book on comics has taken such a simple yet methodical approach to laying bare how the comics medium really works.
in "How to Read Nancy: The Elements of Comics in Three Easy Panels" 31 out 2017 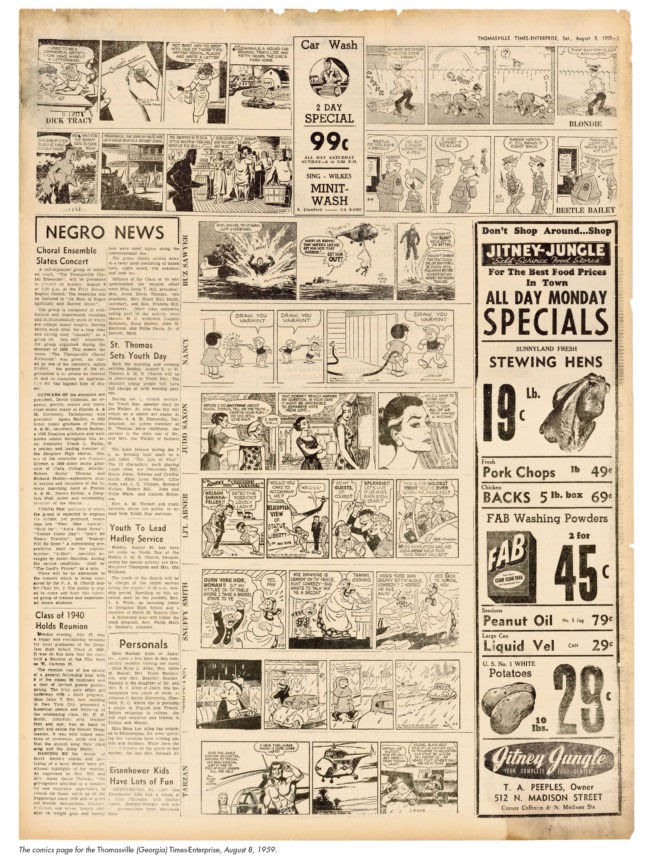 As an example of what can potentially go wrong in the presentation of a daily comic strip on a printed page, the Thomasville Times-Enterprise for August 8, 1959, stands as a virtual encyclopedia of small disasters. Strip titles were insensitively slapped onto (or directly into) the strips, vertically as well as horizontally, at the episode’s start (or finish). Panel borders were randomly sliced and diced. The only thing on this page preventing Dick Tracy and The Phantom from morphing directly into Blondie and Beetle Bailey is a ninety-nine-cent car wash ad.
in "Appendix 2: Further Contexts [An Excerpt from How to Read Nancy]" 27 nov 2017

According to layout authority Edmund C. Arnold in his Modern Newspaper Design (1969), “Placement of comic strips has no measurable effect on their popularity. Some editors prefer to alternate dark strips (those with large masses of black, such as Rex Morgan, M.D. or Buz Sawyer) with light ones (such as Peanuts or Andy Capp). Some say that this makes it easier to control ink on the presses, but most admit that they do it only because it pleases their own eye.” Nancy’s simple contrasting shapes, ample negative space, and bold linework does indeed command the reader’s eye. (Although in the final analysis it is, in this case, clearly no match for that special on stewing hens at Jitney-Jungle.)
in "Appendix 2: Further Contexts [An Excerpt from How to Read Nancy]" 27 nov 2017

Situated just above the page’s fold in the upper stem of its T-formation of three-column thrills, Nancy was neither prominently featured nor completely buried; rather, it was just one more feature of the day to be consumed or ignored depending on which of Thomasville’s 18,239 citizens this page reached. It is well worth noting that this still does not prevent the eye from being drawn to the strip (nor from the gag being quickly communicated).
in "Appendix 2: Further Contexts [An Excerpt from How to Read Nancy]" 27 nov 2017 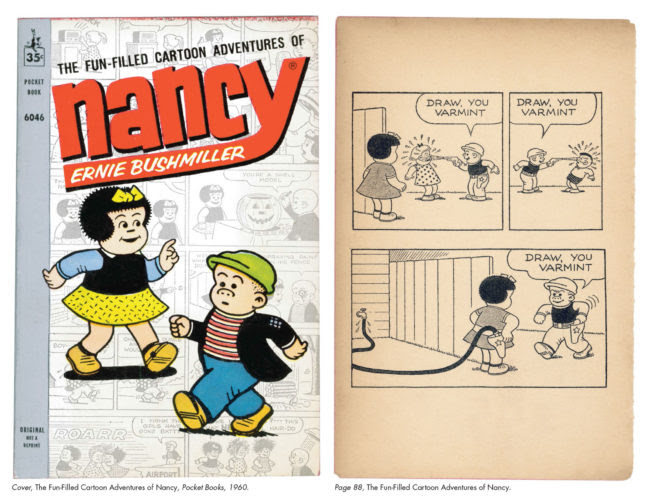 The above right page, from a cheaply produced 1960 paperback reprint of Nancy dailies, attempts to thwart its standardized (and ill-suited) format by stacking the daily strip’s panels in two even rows, creating two awkward bands of dead space in the bargain.

Here the gag is still delivered, albeit haltingly, as the pause between panels two and three is necessarily extended and shifted, creating a momentary visual hiccup en route to the snapper.

The Fun-Filled Cartoone Adventures of Nancy was no continuous narrative but a series of seemingly random dailies culled from the years 1958, 1959, and 1960. However, with all clues to their episodic nature obliterated (title, indicia, date, signature), this collection, it can be argued, was unintentionally encouraged to be read straight through as a kind of absurdist pseudo-narrative.
in "Appendix 2: Further Contexts [An Excerpt from How to Read Nancy]" 27 nov 2017

Other paperback reprints (including the long-running Peanuts series) typically indulged in a more elaborate reformatting of daily strips, often eliminating the panel borders completely, resulting in a more airy and design-conscious page (which nonetheless completely sabotaged the cartoonist’s original intentions).
in "Appendix 2: Further Contexts [An Excerpt from How to Read Nancy]" 27 nov 2017

Typical mid-twentieth-century newspaper technology may have produced a daily record that was dependably legible, but never one that was particularly definitive when it came to reproducing photos of NASA space monkeys, ads for the brand-new Bic ballpoint pen — or comic strips. Nor was it ever expected to be. Yesterday’s newspaper has been synonymous with today’s toilet paper since the invention of the daily press.
in "Appendix 2: Further Contexts [An Excerpt from How to Read Nancy]" 27 nov 2017

In comparison, twenty-first-century technology delivers imagery that is so pixel-accurate that it is not to be believed. So don’t believe it. In full disclosure, the version of the strip presented [is] a 1960 paperback reprint on a paper grade only slightly better than newsprint. The unavoidable irony of crafting an appreciation of craftsmanship around a recrafted specimen (a fact not lost on the authors) leads one to ask if such a thing as a definitive version of any published comic strip can ever truly exist.
in "Appendix 2: Further Contexts [An Excerpt from How to Read Nancy]" 27 nov 2017

Differences in paper stock, ink, printing quality, and innumerable other variables conspire to ensure that each reproduction of a daily comic strip is inherently unique. In addition, the specifics of the strip’s context (editorial policy and layout practices of a given publication) can alter the reading of the work dramatically.
in "Appendix 2: Further Contexts [An Excerpt from How to Read Nancy]" 27 nov 2017

The strip above is neither quite black nor white

The drab, sour hue of cheap newsprint is a far cry from the crisp white paper [de um livro moderno]. Made from coarse wood pulp (the entire log, bark and all, is utilized in its manufacture), newsprint absorbs printer’s ink like a thirsty sponge and the results stand in dramatic contrast to the printer’s ink that forms the letters of this sentence, which sits upon the surface of the slick coated stock so handsomely.

The strip above is neither quite black nor white, a combination of gray newsprint (soon cream, then yellow, now dun), imperfect ink coverage, and lurking phantom grays — the visual artifacts of the soaked-in mystery images on the reverse side of the thin newsprint sheet. Paper itself is evocative, and the varieties and grades used in the printing trade can affect the reader’s preconceptions, the reading itself, and the memory of that reading as well. Printed newsprint, in particular, carries a distinctive tactility and unique scent and, when especially well inked, may not completely dry for many years.
in "Appendix 2: Further Contexts [An Excerpt from How to Read Nancy]" 27 nov 2017