Not like they were in the early twentieth century, when the majority of American readers faithfully followed daily comic strips in the pages of newspapers, before radio became a fixture in the American home. And comics aren't a mass medium like they were in the mid-twentieth century, when millions of copies of staple-bound "comic books" were bought at American newsstands and drugstores, before television became a part of daily life. The larger book publishing industry still operates on a mass scale and can still be called a mass medium, but mainly by aggregating a large number of smaller audiences. Relatively few individual books reach a truly mass audience. Television and film remain mass media, though their delivery systems and platforms (and therefore their content) are rapidly changing in response to new digital networks and technology. Video games are certainly a highly inventive and lucrative mass medium. And the Internet is the biggest global mass medium ever invented by humans.

If there are any comics today that are mass media, and therefore "mainstream," they might be comics like these: 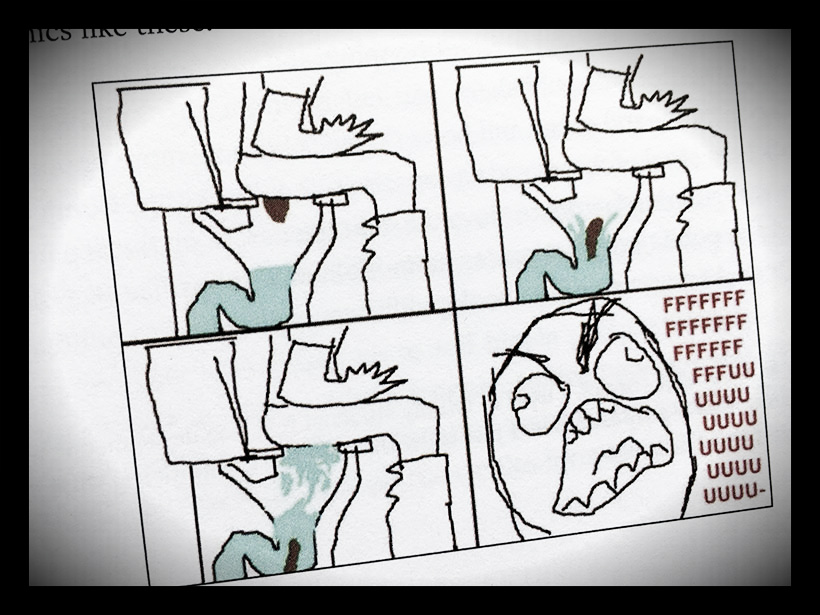 A new paradigm emerged, that of the meme, the idea that hops from site to site like a virus hops hosts. And that viral information offered something very special to the average reader: It offered instant comfort and it scratched the itch of the new. It became some of the most compelling entertainment around.
in "Internet Stone Soup" 4 jul 2017 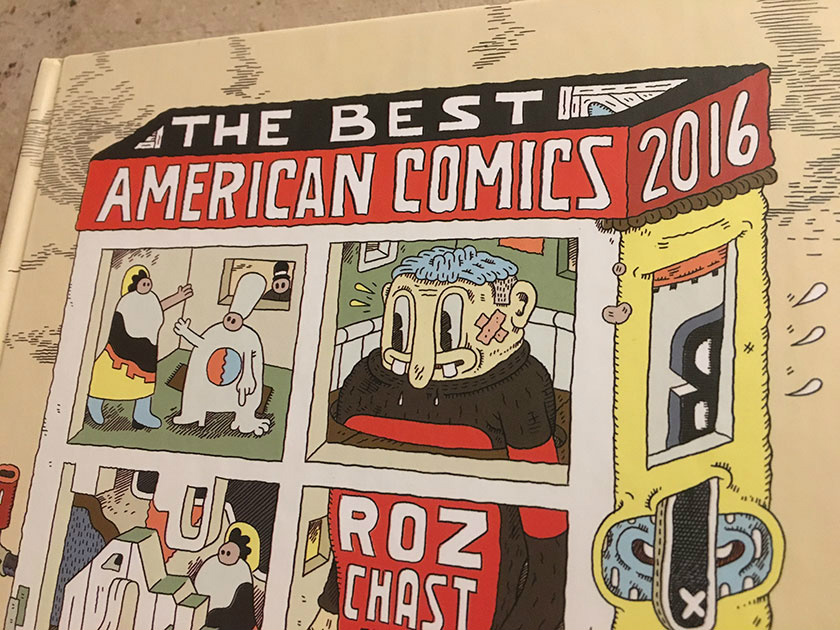 "Comics" is a constructed field, and it is, in some ways, a contested field. Best American Comics, by its very nature, participates in a critical dialogue about what the values and scope of that field might be as it constantly grows in complexity and diversity.

Beginning in the late nineteenth century, comics meant one thing in America: newspaper comic strips. Newspaper comic strips served a simple economic function: they encouraged the sale of newspapers. These comic strips were quite popular and served that function successfully, and as long as they observed broad editorial guidelines they could serve as the site for great aesthetic innovation by many artists.

In the 1930s, the comics field bifurcated with the emergence of the comic book: a staple-bound pamphlet featuring comics stories. Some were published by established magazine publishers, others by new entrepreneurial outfits, and some were churned out by fly-by-night concerns. These comic books were distributed to newsstands, drugstores, and other outlets that served the periodical press.

The multipage comic book format allowed artists to experiment with new, sometimes innovative formal and narrative techniques while developing genres including superheroes, crime, horror, war, science fiction, parody, romance, and others. The lack of regulation or editorial oversight promoted great freedom that some artists and publishers seized to develop work that could satisfy a more mature readership.

But this freedom also permitted slipshod quality, crass trend-hopping, and lurid, sensationalistic content in the hands of less scrupulous publishers, particularly in the 1950s as superhero comic books faded in popularity and crime and horror comics became more popular. Comic books ran afoul of that decade's conservative culture wars. As a group, comic book publishers capitulated to political pressure and adopted the stringent, self-censorious "Comics Code" of 1954, which essentially guaranteed that comic books would only contain child-appropriate content.

This moral panic decimated the comic book industry. Many publishers went out of business, and countless artists, writers, and editors were out of work. Aesthetically, the Comics Code arrested much of the development within the comic book format, effectively banning entire genres, stalling the push toward a more a mature readership, and rendering the field less hospitable to artistic ambition. The superhero genre, which specialized in bloodless violence and simplistic morality, reemerged as a dominant genre, and as a result continues to be closely associated with the comics form in the US.

The Comics Code coincided with the new competition that all print media faced from television, a more powerful mass medium that could replace newspapers and magazines as a daily provider of information and entertainment. Even the well-established newspaper comic strips felt the squeeze. Comic strips were losing their primacy as circulation builders and were given less space in newspapers with each passing decade. Only rare sophisticated minimalists like Charles Schulz (Peanuts) could produce creatively successful work within these physical constraints.

The many constraints of conservative 1950s American culture were strongly challenged by the countercultural currents of the 1960s and '70s, and comics were no exception. Following the trail blazed by Robert Crumb, a generation of young artists who'd been raised in the pre-Code era (including Art Spiegelman, Bill Griffith, Kim Deitch, Shary Flenniken, Robert Williams, Rory Hayes, Justin Green, Diane Noomin, Victor Moscoso, Spain Rodriguez, and many others) produced a body of so-called "underground comix": comic books that outwardly resembled more nominally "mainstream" comic books in their format, but were published outside of the Comics Code's purview to convey personal visions that often violated the social norms of the day.

Operating outside of the mainstream afforded underground cartoonists unprecedented freedom to experiment with form and content. The comics were not "underground" in the sense that they were illegal (though a few were busted for obscenity or trademark violation), but because they bypassed the mainstream distribution system that enforced the Comics Code. The underground comix, like any print media, needed their own distribution system to reach readers, and they found it in a loose network of "head shops" that had sprung up to sell hippie paraphernalia to a countercultural audience. Through this alternative, non-mainstream channel, for the first time a generation of artists were able to use the comics form to express themselves freely and directly to an audience of peers.

But by the mid 1970s, the underground comix era ended. Politics and culture were changing, and punks replaced hippies as the center of outsider culture.

An alternative distribution channel was created to serve the new subcultural audience for superhero comic books: a network of specialty comic book stores that has come to be known as the "direct market." With their cardboard boxes full of back issues, these were similar to stores carrying sports memorabilia, vintage magazines, coins, and stamps, but also offered up fresh weekly content delivered directly to a hardcore fan base from the commercial comic book publishers via new distributors.

Artists like Daniel Clowes, Peter Bagge, Julie Doucet, the Hernandez Brothers, Charles Burns, Chester Brown, and many more who came of age after the underground comix period were similarly dedicated to producing personal, artistic, expressive and innovative comic books. In the 1980s and '90s these artists began publishing their work, often through boutique publishers like Fantagraphics and Drawn and Quarterly. The comic book specialty stores that rose to meet the needs of a fan audience did not generally focus on this kind of material, but they did carry it and provided a natural conduit for the dedicated readers who sought out this work.

Outside of the increasingly conservative field of the newspaper comic strip, the subculture of the specialty comic book marketplace largely defined the "comics" field from the late '70s through the end of the millennium. Within this specialist microcosm, highly relative terminology began to acquire new semantic meaning. Superhero comics and other genre comics, clinging to their one-time mass market status and bolstered by their relatively large market share within the small specialty marketplace, were called "mainstream" comics. Anything else was "alternative."

Of course it was the "alternative" comics, with their wide range of human stories and diverse artistic styles, that eventually connected with a more general readership outside of the bubble world of the comic book store. Art Spiegelman's Pulitzer Prize-winning graphic novel Maus was an anomaly until it was followed several years later by other book-format "graphic novels," including Chris Ware's Jimmy Corrigan-the Smartest Kid on Earth and Daniel Clowes's David Boring.

These and others helped establish the graphic novel as a permanent category of mainstream publishing culture. A flood of book-format comics has poured into libraries and bookstores since then, creating a massive new structural (and cultural) bifurcation in the comics field.

Genre-based comics continue to dominate the specialty marketplace; they have also traveled into the mainstream of culture, but most powerfully as adapted films and television programs rather than as comics per se.

What kind of comic is the most "mainstream"?

Is it the comic that sells best in comic book stores? Or the one that sells best in bookstores? The one that's been adapted into the most successful film? Or the comic that gets the most reviews from literary critics? Is it something like Fun Home, which has followed Maus into countless school curricula and was named Time's book of the year when it debuted? Or Raina Telgemeier's middle-grade comics memoir Smile, which at the time of this writing has spent almost four years on the New York Times's Paperback Graphic Books bestseller list?

Do we measure sales, influence, or prestige? Or adherence to a cultural or national craft tradition?

For a younger reader today, the most "mainstream" comic they encounter might be the comic with the most followers or reblogs on Tumblr, or the one with the most support on Kickstarter or Patreon.

Different areas of comics can sometimes seem to be jockeying for "mainstream" status in the public eye, and they all have their partisans. But where does this leave the small, self-published work, seen only by dozens, that represents a real breakthrough for some artist? Or the excellent book without a publicist that fails to get substantial notice in the press? Or the incredible comic posted to a blog with only a handful of followers?

Comics have gone in so many different directions that there is no baseline—no "normal"—anymore; not in terms of style, or form, or format, or narrative, or method of distribution.

The most exciting comics artists today all understand that. 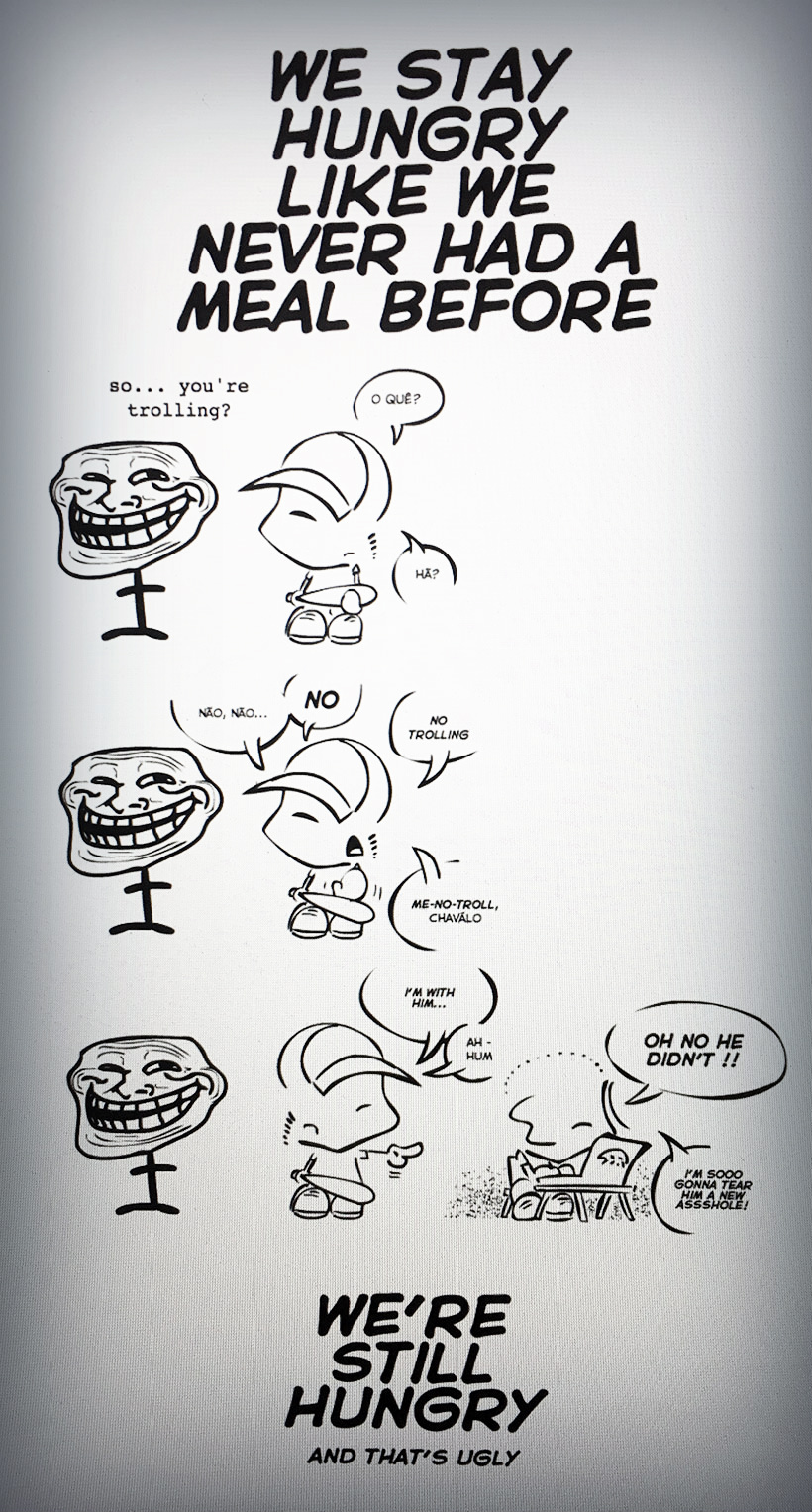 reblogging some other punx

mo' than meets the eyes