"The finger trap": you are placed loosely within the joke, which is so playful, so light—why protest? It’s only when you pull back—show that you’re hurt, or get angry, or try to argue that the joke is a lie, or, worse, deny that the joke is funny—that the joke tightens. If you object, you’re a censor. If you show pain, you’re a weakling.
in "How Jokes Won the Election" 23 jan 2017

How do you fight an enemy who’s just kidding?

Since November 9th, we’ve heard a lot of talk about unreality, and how what’s normal bends when you’re in a state of incipient autocracy. (...) But what killed me last year were the jokes, because I love jokes—dirty jokes, bad jokes, rude jokes, jokes that cut through bullshit and explode pomposity. Comedy might be cruel or stupid, yet, in aggregate, it was the rebel’s stance. Nazis were humorless. Jokes were a superior way to tell the truth—that meant freedom for everyone.

But by 2016 the wheel had spun hard the other way: now it was the neo-fascist strongman who held the microphone and an army of anonymous dirty-joke dispensers who helped put him in office. Online, jokes were powerful accelerants for lies—a tweet was the size of a one-liner, a "dank meme" carried farther than any op-ed, and the distinction between a Nazi and someone pretending to be a Nazi for "lulz" had become a blur.
in "How Jokes Won the Election" 23 jan 2017

The joke protected the non-joke, "in a spirit of irony."

Literal Hitler was an inside joke, destabilizing by design; as with any subcultural code, from camp to hip-hop, it was crafted to confuse outsiders [one of a thousand such memes, flowing from anonymous Internet boards that were founded a decade ago, a free universe that was crude and funny and juvenile and anarchic by design, a teen-age-boy safe space]. Then it morphed, as jokes did so quickly last year, into a weapon that might be used to mock any comparisons to Hitler—even when a guy with a serious Hitler vibe ran for President
in "How Jokes Won the Election" 23 jan 2017

Two thousand sixteen was the year that those inside jokes were released in the wild.

There was in fact a global army of trolls who were eagerly "shit-posting" on Trump’s behalf. Like Trump’s statements, their quasi-comical memeing and name-calling was so destabilizing, flipping between serious and silly, that it warped the boundaries of discourse.
in "How Jokes Won the Election" 23 jan 2017

This all makes for a compelling narrative. But what actually happened isn't so straightforward. (…) It cannot and should not be tethered to online communities of the past.

These assumptions are worth challenging, well beyond issues of semantics, well beyond research quibbles, well beyond academic flag planting. (...) It is therefore imperative that we are clear about what is known, what has precedent, and what in the hell we are even talking about when we talk about "trolling" in 2017.
in "Trolling Scholars Debunk the Idea That the Alt-Right’s Shitposters Have Magic Powers" 22 mar 2017

In 2017, the term "trolling" doesn't mean much. And yet it is thrown around as easy shorthand

The first and most basic point to contest is the idea that "trolling" is an appropriate descriptor for the white nationalist alt-right. Though the word "trolling" rose to prominence in the early-mid 2000s as a specific, bounded point of subcultural self-identification, the term has been applied to so many different kinds of behaviors in so many different contexts over the last ten years that big and small, damaging and harmless, progressive and reactionary, are now flattened into one slippery category vaguely suggesting disruptiveness.

That use of the term "troll" when referring to contemporary 4chan users posits a false equivalency between those who were described as trolls in the past and those who are described as trolls in the present. As if trolling (or what's referred to as trolling) now is the same thing as what was referred to as trolling then. The fact is, even back then—in the ancient civilization of 2007—trolls were a heterogeneous bunch. Self-identifying trolls could be harmless pranksters, less harmless troublemakers, and merciless abusers. Some expressed vicious bigotries; some expressed more ambivalent bigotries; and some didn't express any bigotries. Some even trolled bigots.

Calling antagonists—particularly white nationalist antagonists—"trolls" in 2017, and furthermore linking these "trolls" to the trolls of yesteryear, overwrites the fracture that always existed within early trolling subculture. This doesn't just tie contemporary "trolls" to a homogenous legacy that never existed, it implicitly suggests that we've been here before; that online trolling is same as it ever was. But we haven't, and it isn't. Trolling never was any one thing, and it certainly wasn't the thing the alt-right has metastasized into.

The idea that 4chan and its presumably interchangeable spawn Anonymous is fundamentally "united by a common culture and set of values, fuzzy around the edges, but solid at the core," just doesn't hold up in the face of the verifiable historical record.
in "Trolling Scholars Debunk the Idea That the Alt-Right’s Shitposters Have Magic Powers" 22 mar 2017

The second claim warranting pushback is the false assumption that alt-right "trolling" is equally interchangeable with 4chan and Anonymous, an assumption that posits static, ahistorical framings of both. Making this claim, either explicitly or implicitly, obscures the one basic, unifying fact of 4chan and Anonymous: that they change, both in terms of demographics and ideologically .
in "Trolling Scholars Debunk the Idea That the Alt-Right’s Shitposters Have Magic Powers" 22 mar 2017

The third issue to address is the seemingly explanatory idea that alt-right trolls—were the lynchpin for securing Trump's Presidential victory. That activity didn't happen in a vacuum, and wasn't self-propelling. "Trolls" and the alt-right may have played a prominent role in the 2016 election, but that fact is dependent upon and cannot be untangled from journalistic coverage that amplified their messaging.

Media coverage—even coverage condemning alt-right antagonisms—helped conjure this monster, and how that conjuring, in turn, helped amplify Trump's overall platform (which itself was a series of memes). The fact that alt-right participants received so much coverage speaks to an even deeper issue, perhaps the weightiest issue, influencing Donald Trump's rise. More than fake news, more than filter bubbles, more than insane conspiracy theories about child sex rings operating out of the backs of Washington DC pizza shops, the biggest media story to emerge from the 2016 election was the degree to which far-right media were able to set the narrative agenda for mainstream media outlets.

What Breitbart did was ensure that what far-right pundits were talking about became what everyone was talking about, what everyone had to talk about, if they wanted to keep abreast of the day's news cycle. Alt-right antagonisms—their "trolling"—was one cloud among many in this gathering storm, one roaring towards the mainstream from the far-far right. Shitpost participants adeptly harnessed this energy, they didn't create this energy.
in "Trolling Scholars Debunk the Idea That the Alt-Right’s Shitposters Have Magic Powers" 22 mar 2017

And this gets to the heart of why any of this matters. It allows us to understand where we are and how we got here. [It] also allows us to anticipate where we might be going next, for better and for worse. [To] fully contextualizing our present moment. Puts us in a better position to stand up to those who attempt to hijack the narrative.
in "Trolling Scholars Debunk the Idea That the Alt-Right’s Shitposters Have Magic Powers" 22 mar 2017

Trump was a hot comic (...) He was the insult comic, the stadium act, the ratings-obsessed headliner who shouted down hecklers. His rallies boiled with rage and laughter, which were hard to tell apart. Like that of any stadium comic, Trump’s brand was control.

The Big Lie is a propaganda technique: state false facts so outlandish that they must be true, because who would make up something so crazy? Lying about telling the truth is part of the joke.
in "How Jokes Won the Election" 23 jan 2017 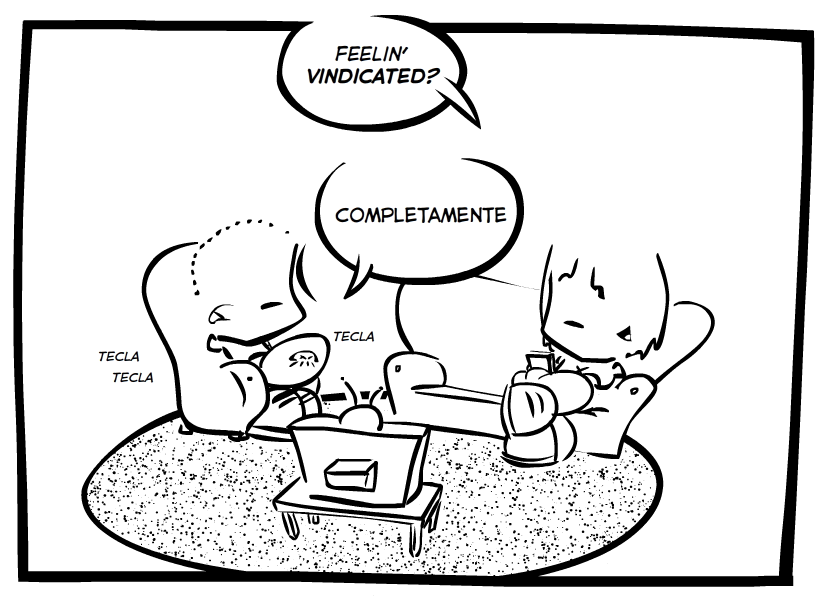 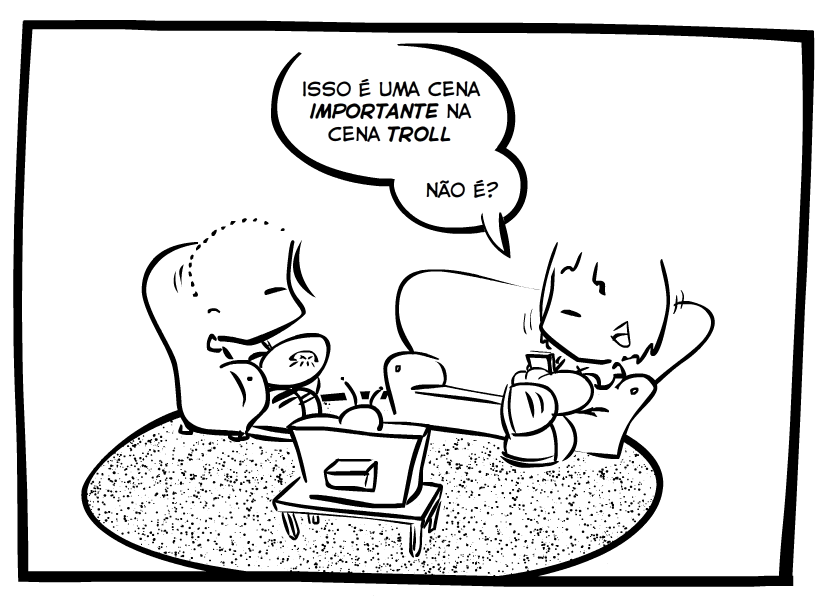