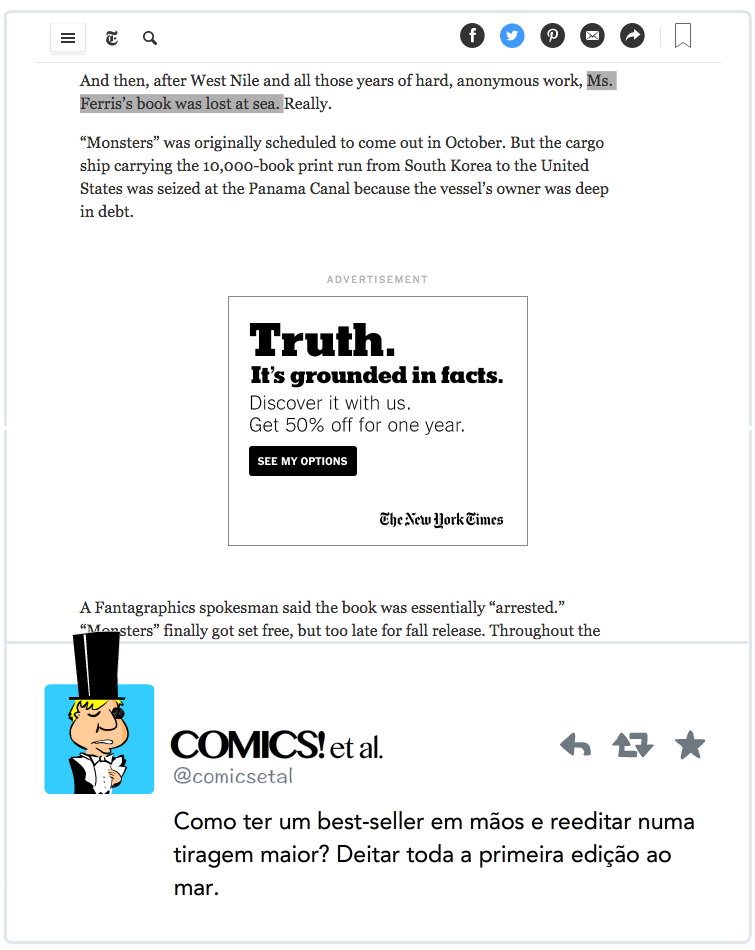 My Favorite Thing is Monsters has become a bestseller (…) the publisher has just gone back to press for a 30,000-copy second printing, which marks the biggest second printing the house has done in its 40-year history.

Bookstore market: sell-through is the data that is tracked and trended.

BookScan, Neilsen: this is not a list of every book that sold through every book store (...) Neilsen claimed in 2013 that approximately 85% of retail, physical book sales are tracked through them

Either way, what I’m trying to get across to you is that this really is entirely unreliable data in terms of the absolute and total number of books sold, and is only able to give the broadest possible outline of what’s happening in book stores, based upon the data-set that I’m being given, which is in no way comprehensive.

Now topping over ten million graphic novels sold! Amazing performance, and hopefully we can now stop talking forever about silliness like "the death of comics" or "the death of print". Both are doing just fine!

The trend for print books in general (not just looking at comics) through BookScan appears to be a general growth of 3.3% in 2016 — which continues the three-year trend of comics-material being far stronger than the curve.

(For what it is worth, overall book sales through Diamond in the Direct Market appear to be up by just 1.2%, so the book market continues to grow significantly faster.

Clearly, the first thing you can’t help but notice is that eighteen of the Top Twenty are books aimed at younger readers

Only five of the top twenty books are created by white men, and only three of them could be considered work primarily aimed or created through the Direct Market comic book system. Things are clearly changing.

At #8 comes out first not for kids book, and one that celebrated it’s twenty-eighth anniversary at that: "Batman: The Killing Joke" by Alan Moore and Brian Bolland, a superhero comic that’s absolutely not for children. At 130k, that’s closing on double of 2015’s performance of 70k, and double again 2014’s showing of 32k. One imagines the animated adaptation last year drove that growth to a large extent.

What if you sort the chart by dollars grossed, instead? That changes things a bit: here you’ll see the power of the higher cover price, and "The Walking Dead" zooms up to take the top three spaces. (...) Perhaps as importantly, the 2016 charts have twenty-three books that generated more than a million dollars in gross sales – completely smashing the previous record from 2015 of just fifteen books.

How about if we sort it by author? Here are people with more than 10 books placing in the Top 750:

This is a lot smaller list than previous years – only ten people who place more than ten books each, with Kirkman being the real winner here. (...) Just over 2.3 million copies, total, of the Top 750 are by these ten authors, or a bit under 23% of the total sales. Just a few people are writing a lot of the comics sold!

Let’s add some dollar amounts, with these being all of the authors selling over $1m combined in books. That looks like this:

This gives us 34 authors, who sell a combined $101.1m worth of books. What you can take from this is that only a small number of creators drive the majority of the business in comics (and books in general, I think); and conversely, this probably means that most comics aren’t actually significantly profitable any given year.

"When I say "Western" here, I mean publishers/work from Europe and America, as opposed to Asia, not publishers of the genre of "western" comics!"

Resumo de executivo: "record breaking figures, and up nearly 400% from thirteen years ago."

Again, this is a great collective performance, compared to the overall state of print books in 2016 – Manga as a whole was up by higher percentages, but circulation and gross dollars are at the highest they’ve ever been. Comics are doing really fantastic.

E a parte engraçada porque sim: "next, we’ll survey each of the publishers, and their best-selling titles, ranking them by the number of pieces they sold this year".

For the second year in a row, the #1 Western publisher in the Top 750 is Scholastic.

Though, note that this is exclusively through BookScan reporters – there is a working assumption that whatever retail bookstore sales we’re seeing here are just a tiny fraction of their overall sales – between Book Fairs, school sales, Library sales and such, Scholastic might be racking up much more impressive numbers.

The conventional wisdom is that the BookScan reporting is only the tip of the iceberg because the real market for kids books (and Raina, in particular) is going to be through things like Scholastic Book Fairs that run directly through elementary schools all over America. That’s all largely invisible, though, and something we can but speculate on.

What’s impressive is that Scholastic does this with such a relatively low number of titles – only about one third of the #2 publisher, and they’re selling 58% more comics into the Top 750. (...)Scholastic has two books over 200k, six more over 100k, two more over 50k, nine more over 20k, and another five over 10k. That’s a crazy good performance.

Our #2 publisher in the Top 750, once again, is DC Entertainment.

Image Comics moves up a spot to become our #3 Western publisher via the BookScan reporters; Image has 72 titles placing within the Top 750 in 2016, that sell 909k copies and almost $23m. (...) It is not Image’s best percentage growth ever, but they’re still ticking up, and a lot is on the strength of "The Walking Dead".

Dropping down to #4 Western Publisher in the BookScan Top 750 is Simon & Schuster, who are also the first of the mainstream book publishing so-called "Big Five". They take this position with just seven placing titles, which total 602k in units and $9.2m at retail.

It is another big year of growth for Marvel, as they again have their best year in BookScan since we’ve been tracking. Having said that, "Marvel" is practically synonymous with "comics" itself amongst "civilians" – and they have multiple films and television shows running, well-saturating the market with awareness of their characters and effectively working as free advertising for the comics, that selling fewer comics than Robert Kirkman alone did in the Top 750 seems a little underwhelming. Marvel’s publication and collection strategy is a little all over the map, with it really being unclear to the casual reader what book should be read in which order, and this chaos in the line, I believe, is the largest reason they’re not outselling DC significantly in the book market.

The #6 publisher continues with Andrews McMeel, [com uma importante ressalva:] they publish a whole lot of comics (humor strips, like "Calvin & Hobbes") that I no longer see in the data that gets leaked to me – almost certainly they’re doing several times better than this chart would suggest because of those books

Slipping back to the #9 largest publisher with Western comics in BookScan 2016 is another of the "big five" *: HarperCollins. Harper places nine books into the Top 750 for a total of 195k copies sold, and $3.5 million.

Taking a big step up to round out the 2016 Top 10 publishers of Western comics in the BookScan Top 750 at #10 is IDW Publishing who place four books for a total of 158k sold and $3.7m. All four entries are from Representative John Lewis’s "March" trilogy (one of them is the boxed set of all three volumes), his memoir about the civil rights struggle of the 1960s.

IDW moves their bookstore distribution over to Penguin Random House (and away from Diamond Books) in 2017, joining DC and Dark Horse. One imagines this will give their line of licensed comics a big boost in the next year.

Holtzbrinck, which owns Macmillan, is also one of those publishers with lots and lots (and lots) of imprints: FirstSecond, and Square Fishare the only two to make the Top 750, but there are others down into the Long Tail as well – I have also identified Farrar Straus Giroux, Henry Holt, Hill + Wang, Metropolitan, Picador, Roaring Brook, Rodale Press, St. Martins Griffin, Times books, and Tor. Holtzbrinck also distributes several other publishers, including Bloomsbury, Drawn & Quarterly, Papercutz, and Seven Seas. Holtzbrinck-owned companies placed fourteen titles in the Top 750, for about 130k and just over $1.7m combined.

While not one of the "Big Five", there are other publishers that I would consider both "significant" as well as bookmarket-first who did well in the Top 750. In straight alphabetical: Henry N. Abrams (10 titles), Houghton Mifflin Harcourt (2), and Hyperion/Disney Press (6) Joe Books (7), and Papercutz (1). Outside of those bookstore-native publishers, we’ve got several Direct Market-native publishers who placed more than three titles into the Top 750. Those would be: Oni (6 titles placing), Boom (4), Drawn & Quarterly (2), and Archie (1)

Drawn & Quarterly places two books into the Top 750, for just over 11k, and almost $250k. Their best-selling title is Adrian Tomine’s "Killing and Dying" which sells 7239 copies.

There are three other books from smaller publishers that sell over 10k copies – 15k copies of "Clinton Cash: The Graphic Novel" from Regnery, 14k copies of Gareth Hinds’ adaptation of "The Odyssey" from Candlewick, and 13k copies of Daniel Clowes’ "Patience" from Fantagraphics (surprisingly they’ve never placed enough books to justify building a long-tail for them). Fanta also comes in towards the bottom of the chart with 4092 copies of Clowes’ "Ghost World".

The remaining seven titles came in under 10k, and include 9504 of Jeff Smith’s complete "Bone" (self-published) and 9330 copies of Ted Rall’s biography comic of "Bernie" (Sanders, that is); Amazon’s comics imprint, Jet City, has a hard time selling a George RR Martin comic, only moving a bit over 5k of "Hedge Knight"

If we look at the entirety of the 21k-long "Long Tail" BookScan list, how do the publishers stack up in 2016? We’ll consider it in dollars, this time, including both "east" and "west" comics, and round everything to the nearest hundred-thousand just for ease of presentation:

And that’s pretty much what BookScan in 2016 looks like to these eyes.
How does it look to you? 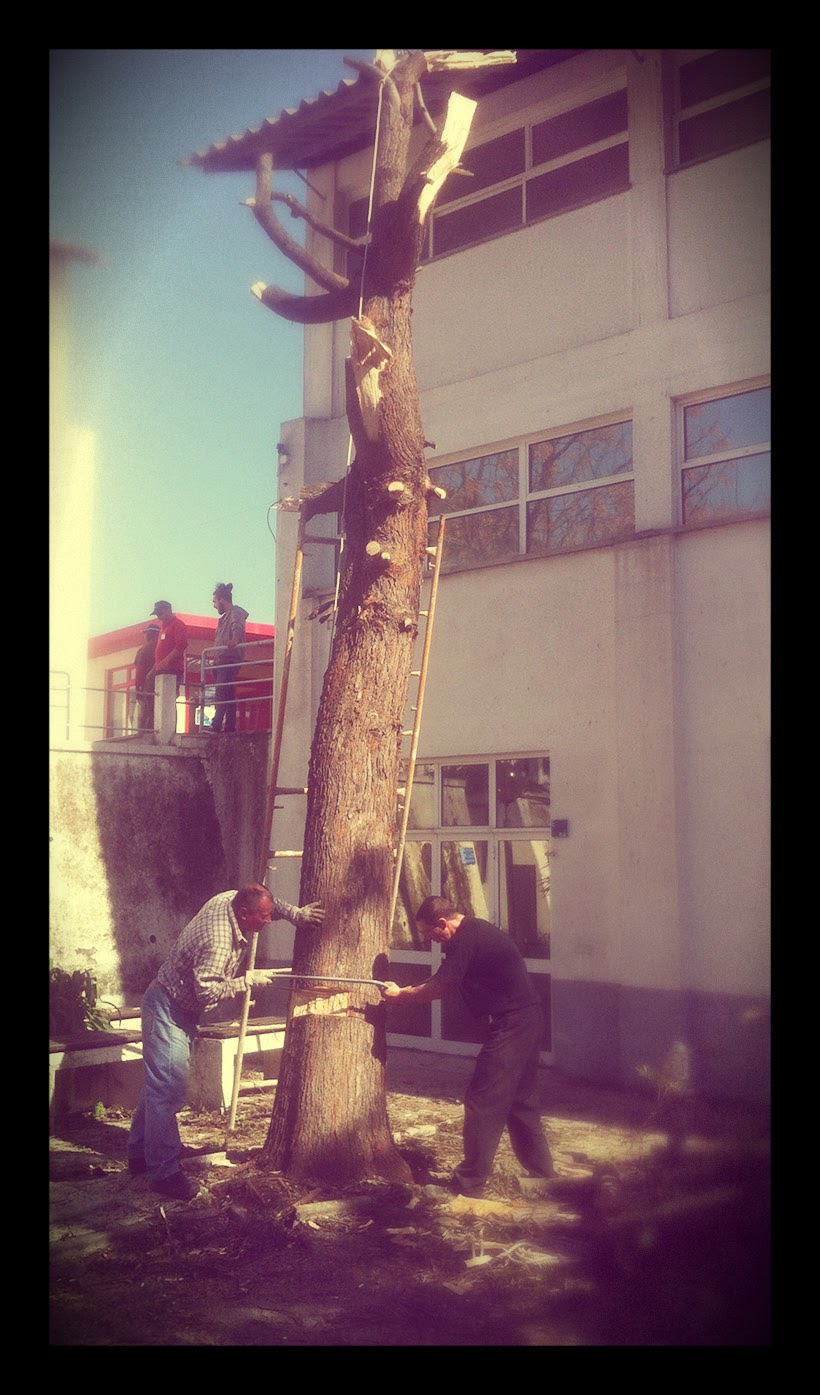