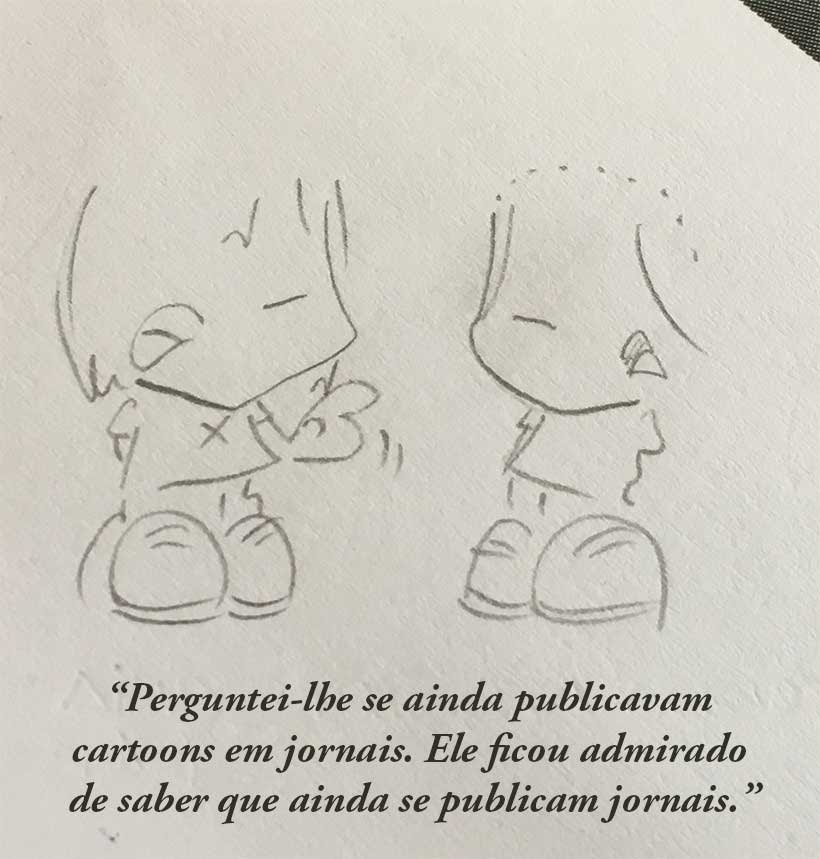 my failed new yorker cartoon gag: I'll work on it...
The humor is very dark, but it’s there. If we lose that, we’ve lost everything.

New Yorker cartoons often ridicule the magazine’s readers. The presumed reader of The New Yorker was culturally literate, socially aware and empathetic. Cartoons often satirize the pieties of these readers as well as their self-centered dissatisfactions. "The most New Yorker magazine-ish cartoons are not making fun of the less fortunate, and they’re not faux rebellious, speaking ‘truth’ to power. Rather, they ridicule their own class—maybe, just maybe, producing some skepticism about its unconsciously held assumptions, and, if not an out-and-out laugh, then at least an out-and-out wry smile of recognition."
in "A Look Back at 20 Years of Mankoff’s New Yorker" 27 mar 2017

Mankoff pauses, an elaborately dramatic moment, and then says he’ll give ten bucks to anyone who can find a cartoon in back issues of The New Yorker that isn’t in the Complete Cartoons. Another pause. "Twenty bucks if you keep quiet about it," he snarls with a fiendish grin.
in "A Look Back at 20 Years of Mankoff’s New Yorker" 27 mar 2017

"The Complete Cartoons of the New Yorker, a nine-pound 656-page gargantuan compendium that prints 2,004 of the cartoons the magazine has published from its first issue, February 21, 1925, through the February 23, 2004 anniversary issue. This historic achievement comes equipped with two CDs that contain all 68,647 cartoons published during that period."

What kind of cartoon editor was Mankoff? Not bad, over the long haul.
in "A Look Back at 20 Years of Mankoff’s New Yorker" 27 mar 2017

"Lee Lorenz handed me a plane on automatic co-pilot," Mankoff said of the established roster of talent. "People were ready to do this forever". But Mankoff came to a realization: he needed to cultivate a new crop of cartoonists. "This wonderful plane flying on autopilot needed some actual piloting or it was gong to run out of fuel". But before any new cartoonists could get a foot in the door, Manoff said, "I need to open the door a bit wider. That’s why in 1998, I established Open-Call Tuesdays when anyone who wanted to show me cartoons could make an apointment to see me. Previously that privilege had been restricted to established New Yorker cartoonists. And a lot of fresh-faced aspirants did show up."
in "A Look Back at 20 Years of Mankoff’s New Yorker" 27 mar 2017

But Mankoff realized showing up was not enough. These new talents needed cultivation. So instead of simply giving them rejection slips—the usual New Yorker cartoon tutorial—Mankoff started coaching them. "I realized that if all you ended up having were failures, all you would have learned is how to fail. So I broke the code of silence and became a real blabbermouth, giving aspiring cartoonists feedback and developing a mini-course in cartoon fundamentals and the psychology of humor." Mankoff eased talented new cartoonists into the magazine a little before they were absolutely, unquestionably ready. "We were cutting new cartoonists some slack," he explains, "—doing some affirmative action, giving them some reinforcements to get them hooked on cartooning the way I had been."
in "A Look Back at 20 Years of Mankoff’s New Yorker" 27 mar 2017

The New Yorker cartoon editor is no longer involved in picking the magazine’s cover illustration as of yore. That duty has fallen to a relatively new staff position, art editor, filled these days, and since its inception in the early 1990s under Tina Brown’s editorship, by Francoise Mouly, who, with her husband Art Spiegelman, is apparently responsible for bringing much new talent into the magazine, often recruiting from the ranks of Spiegelman’s underground cartoonist "gang" (as Mankoff termed it) whom she and Spiegelman promoted in their avant garde 1980s magazine, Raw.
in "A Look Back at 20 Years of Mankoff’s New Yorker" 27 mar 2017

Mankoff, I think, regards cartoonists, justifiably, as superior beings. After all, many cartoonists, he observes, can write passable prose; few journalists can draw acceptable cartoons.

Its cartoons also rank high on the cultural scale generally. But the New Yorker writers seem to stand higher in our sober Puritan work-ethic culture: serious reporting is closer to God than silly laughter.

New Yorker cartoons are topical (and always have been) but not as front-page topical as newspaper editorial cartoons.
in "A Look Back at 20 Years of Mankoff’s New Yorker" 27 mar 2017

"In the early ’90s, the market for magazine cartoons was already not only drying up, but dried up. There was still the Everest of The New Yorker, but the rest of the markets were pretty much the equivalent of foothills." [And most of them were quickly giving up publishing cartoons.]
in "A Look Back at 20 Years of Mankoff’s New Yorker" 27 mar 2017

Mankoff explained the disappearance of cartoons from most magazines in those days by saying that "they’ve gotten over-designed—there’s no place for a cartoon." Cartoons disappeared from magazines when art directors started controlling the content of the publications. Art directors like solids—solid colors, solid blacks, solid white space, and the solid "gray" of columns of type. Cartoons interfere with the cadence-counting impulse of page design by manipulation of solids.
in "A Look Back at 20 Years of Mankoff’s New Yorker" 27 mar 2017

Mankoff since he became editor: "the biggest change was that cartoons, even of the very benign variety that appear in The New Yorker, now have great power to offend.
in "A Look Back at 20 Years of Mankoff’s New Yorker" 27 mar 2017 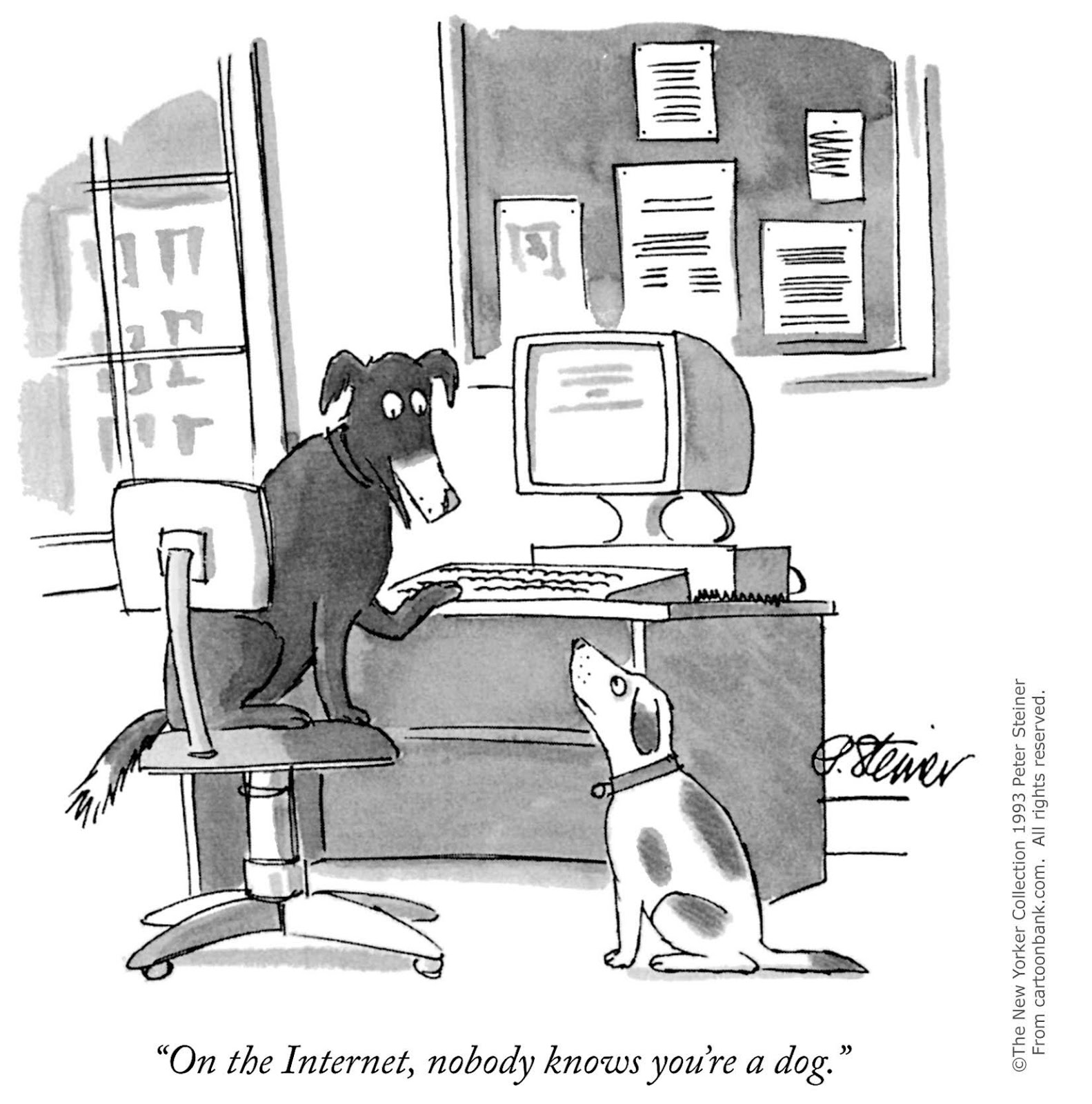 The cartoon marks a notable moment in the history of the Internet. Once the exclusive domain of government engineers and academics, the Internet had by then become a subject of discussion in general interest magazines like The New Yorker. Lotus Software founder and early Internet activist Mitch Kapor commented in a Time magazine article in 1993 that "the true sign that popular interest has reached critical mass came this summer when the New Yorker printed a cartoon showing two computer-savvy canines".
in "On the Internet, nobody knows you're a dog" 28 mar 2017

The cartoon symbolizes an understanding of Internet privacy that stresses the ability of users to send and receive messages in general anonymity.
in "On the Internet, nobody knows you're a dog" 28 mar 2017

Lawrence Lessig suggests "no one knows" because Internet protocols do not force users to identify themselves; although local access points such as a user's university may, this information is privately held by the local access point and is not an intrinsic part of the Internet transaction.
in "On the Internet, nobody knows you're a dog" 28 mar 2017

A study by Morahan-Martin and Schumacher on compulsive or problematic Internet use discusses this phenomenon, suggesting the ability to self-represent from behind the computer screen may be part of the compulsion to go online. The phrase can be taken "to mean that cyberspace will be liberatory because gender, race, age, looks, or even 'dogness' are potentially absent or alternatively fabricated or exaggerated with unchecked creative license for a multitude of purposes both legal and illegal", an understanding that echoed statements made in 1996 by John Gilmore, a key figure in the history of Usenet. The phrase also suggests the ability to "computer cross-dress" and represent oneself as a different gender, age, race, etc. On another level, "the freedom which the dog chooses to avail itself of, is the freedom to 'pass' as part of a privileged group; i.e. human computer users with access to the Internet".
in "On the Internet, nobody knows you're a dog" 28 mar 2017

"A prime example of someone who was bullied, and then grew up to be a bully."